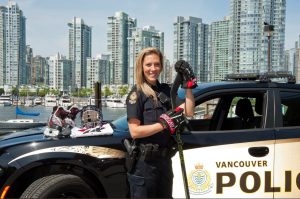 As a three-time gold medalist, Agosta is competing in the women’s contest in St. Louis.

Happening Friday, January 24, the game pits Team Canada against the U.S., which the hockey player has done many times over her 16-year Olympic career.

Best of luck to our own @MeghanAgosta who is playing for for @HC_Women's hockey team during the #RivalrySeries. Meghan balances a career in policing, being a mom, and representing Canada, pretty impressive. https://t.co/waCypksElF #TeamVPD #rolemodel @VancouverPD pic.twitter.com/M6CFLfxbWq

While the Americans won the 2018 gold medal game 3-2, Agosta led the Canadians to gold in 2010. Because of her offensive, Agosta earned the Most Valuable Player and Best Forward awards.

The hockey player took a break from the national team after the 2014 Games, before joining the Vancouver Police Department.

The NHL game will happen over two 10-minute periods. That will be followed by a three-minute overtime session, if there’s a tie.

What an amazing honour and privilege it is to be heading to St. Louis for the @nhl All-Star Weekend. What a great way to continue growing the game and paving the way for the younger generations. Don’t forget to tune in January 24th during the #NHLAllStar skills competition to watch Canada and USA compete in the Elite Women’s 3 on 3 game presented by @adidas

You can watch it all happen on on CBC or TSN. So, will you be rooting for our Vancouver player?

For more sports news in Vancouver, check out our Sports section.