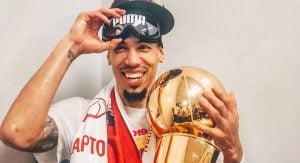 Danny Green, a member of the Toronto Raptors team that won the NBA championship this past June, was in town this week, but his time here in Vancouver got off to a rough start.

As the 2 x NBA champion details on his podcast, Inside the Green Room: “We booked the AirBnB; on the pictures it looks great, it always does — I stay in a hotel but a lot of guys stay in an AirBnB. They go to check in and we go to eat and they’re like ‘yo we gotta change (Airbnb’s); it’s old, it’s raggedy, it feels haunted’”, Green said.

“So we go check out the Airbnb and we go upstairs and we’re there for about 10 minutes checking out the map like ‘oh shit Canada has a lot of stuff going on,’ we didn’t know there was all this stuff. … So we go back outside and we pretty much got robbed. Not robbed of everything, but two book bags gone — and one of the book bags had A LOT of stuff in it.”

Related: Dear NBA, Vancouver Misses You and We Want You Back

Green says the backpack contained electronics, laptops, and documents pertaining to the basketball skills camp he was in town for.

After they were stolen, Green said he and his friends ran around the area looking for his stuff. “We ran the streets like savages looking for whoever took these book bags”, he said.

This news may come as a bit of a surprise to some Vancouver residents, until you realize that this happened near Vancouver’s notorious East Hastings neighborhood.

Green was in town for several events. He was the featured guest at a meet-and-greet with fans, at the grand opening of London Drugs’ Dunbar store on July 5th. A different meet-and-greet with him was held at the Foot Locker in Metrotown later the same day. On July 6th and 7th, the 3-point sharpshooter held a basketball skills camp at the Richmond Olympic Oval.

Green also announced this week that he will be playing for the Los Angeles Lakers next season, reuniting with former-teammate LeBron James.

The announcement came immediately following his long-time teammate, and NBA Finals MVP, Kawhi Leonard’s announcement that he would be joining the Los Angeles Clippers.