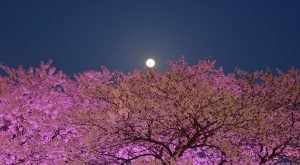 Sky watchers can look forward to catching a glimpse of a rare Super Pink Moon on April 7th—which will be the brightest and biggest supermoon of 2020.

According to The Old Farmer’s Almanac, its name has nothing to do with its actual colouring. But rather, it’s referred to as being the pink moon because it’s the first full moon of spring and the timing coincides with the early bloom of a wildflower that is native to North America, called “phlox subulata.”

But this pink moon will be even more spectacular because it also aligns with the lunar perigee—which according to EarthSky, is when the moon gets to its closest point on earth in its monthly orbit.

Given its close proximity to earth, it appears much larger and brighter than a regular moon—making it a supermoon.

The best viewing spot to take in the Super Pink Moon is somewhere away from city lights, in a remote or rural park.

For more beauty across our province, check out our Travel & Outdoors section.