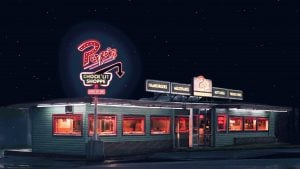 Rocko’s Family Diner, a 24 hour classic 1950s restaurant located in Mission, has announced that they’re honouring the late Luke Perry with his own milkshake.

The popular diner will be naming a milkshake after the “Riverdale” star, who passed away earlier this week after suffering a massive stroke.

Rocko’s is the diner where Perry filmed part of the first season of “Riverdale”. He played Archie’s dad, Fred Andrews, on CW’s hit show and he was seen filming for the show around Vancouver numerous times.

Kelly Sullivan, the manager of the diner, says that they are thinking of creating a milkshake to honour Perry, but haven’t decided which flavour yet.

Rocko’s Family Diner already serves 46 flavours of milkshake and local fans will just have to wait and see which flavour will be Perry’s.