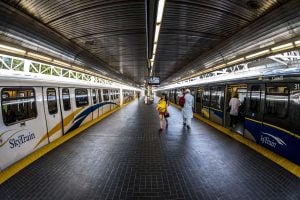 The City of Vancouver is one step closer to getting free transit for children and youth.

Coun. Jean Swanson put forth a motion on Tuesday to support free transit for those aged up to 18 years and to have a sliding scale for low-income residents.

That motion got approved.

This may just be one of many changes for TransLink. Recently the company said it would start offering free Wi-Fi and introduce public washrooms to the system.

“We’re expecting the provincial government to step up and provide the financial support to make it happen to implement these necessary measures,” said Viveca Ellis, coordinator of the #AllOnBoard campaign put on by the BC Poverty Reduction Coalition.

Swanson said her support for the campaign #AllOnBoard comes from her desire to increase safety for youth and adults.

She notes that if people don’t have the appropriate bus fare, they can end up stranded with very few options.

Swanson also wants free transit for residents so they can be able to enjoy what the city has to offer. The new policy might also increase ridership.

However, estimates suggest this policy would result in a $35-million annual loss in fare revenue for TransLink.

She says,”a huge a proportion of people in our city just can’t enjoy parts of the city that other people that have more money can.”

The approved motion is the first step.

The next step is to have Mayor Kennedy Stewart write a letter to TransLink and the provincial government.

“What we have seen in other jurisdictions that have opened up fare free transit for youths, they’ve had a big increase in ridership,” said Jill Drews, senior issues management advisor for TransLink.