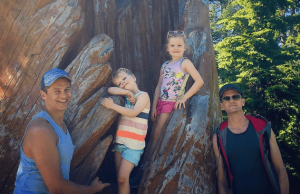 Many actors spend most of their career traveling, something Neil Patrick Harris seems thankful for after recently living in Vancouver.

In an interview published in the New York Times as part of a series on their 52 Places to Go in 2017 list, Harris described Vancouver as a “fantastic city”.

RELATED: Neil Patrick Harris Enjoys Anniversary With Husband In BC

Harris spent five months in Vancouver during the filming of Netflix’s “Lemony Snickets A Series of Unfortunate Events” series. The drama is based on a children’s book series in which Harris plays the lead role of Count Olaf. He is also a producer of the show. Harris resided in the city with his husband and their six-year-old twins.

It’s a fantastic city. When I was there on my own, I took advantage of how health-conscious it is and spent lots of time outdoors. I biked in Stanley Park and also hiked the different trails in the area including the Stawamus Chief, where you can climb three different peaks. When the kids came, I discovered how family-friendly Vancouver is. We were outside a lot, and also went to the Vancouver Aquarium and to the science center. Also, since the city is on the coast, there is great seafood, and I ate amazing sushi and oysters. Harris told the New York Times.

The Vancouver Aquarium is stellar! Loved it! The kids learned all kinds of new things..!

Vancouver is awesome. Took the family up to Grouse Mountain, rode a gondola, saw a lumberjack show and took in the spectacular views. And rested in carved trees. #ohcanada

He was also asked if he would recommend Canada, in general, as a vacation destination.

Absolutely. Besides Vancouver, I’ve been to Quebec City, Toronto, Montreal and Edmonton and have seen how diverse the country is. Quebec City feels very French, while Toronto is a fast-paced metropolis and Vancouver has a laid-back vibe. And, everywhere I’ve been, I’ve enjoyed the people.

It’s safe to assume Neil Patrick Harris will definitely return to the city sometime in the future.