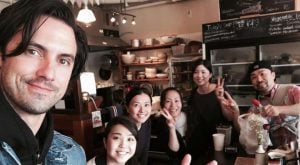 Jurassic World, Guardians of the Galaxy and Parks & Rec star Chris Pratt will be in Vancouver this summer for this action adventure movie based on a comic book series. In addition, his now-ex Anna Farris was in town last year shooting the remake of Overboard which was released in May.

The blockbuster is scheduled to start filming in town this month. It recently hired 2 new writers to get it up to speed.

As mentioned a long time ago by @lemon_buzz , #AScoreToSettle starring Nicolas Cage will be filming in BC. Dates June 24-July 14 in the Kelowna area via DGC. pic.twitter.com/vPOmIM6IGh

Dove Cameron and the rest of the Descendants cast is in Vancouver until July 7th; this is the third instalment of the TV movie series for Disney.

The Art of Racing in The Rain

The film adaptation of Seattle author Garth Stein’s novel of the same name started filming in Vancouver at the end of April. It also stars Amanda Seyfried and Milo Ventimiglia (This Is Us). The stars can be spotted working in town until July 23 when production wraps up

So, what’s the sitch? Kim Possible is getting a live-action TV movie for The Disney Channel! Newcomer Sadie Stanley will play Kim Possible while Sean Giambrone from sitcom The Goldbergs will play Ron Stoppable.

More pictures of my faceeeeee are u bored yet? Also I love Canada but I hate ketchup chips

Buffy The Vampire Slayer and How I Met Your Mother star Alyson Hannigan was recently added to play Kim’s mom, Dr. Ann Possible. The cast also includes Todd Stashwick from 12 Monkeys as Dr. Drakken, Connie Ray as Nana Possible, Erika Tham as Bonnie and Ciara Wilson as Athena. The TV movie is scheduled to shoot in town from June 4 to July 23.

Pitch Perfect star, Tony and Grammy award winner Ben Platt gets his first film lead in the drama Love & Oatmeal. He was critically acclaimed and won a Tony for his performance in the Broadway musical Dear Evan Hansen. He is joined by Gone Girl star Lola Kirke and Vancouver’s Debs Howard. The film is scheduled to start shooting in town from June 4.

Been in love with this story since I first read it and I’m so excited to bring “Love & Oatmeal” to life. 🎥 😭 https://t.co/aYljeiiAI0

This Ali Wong and Randall Park project unites the two comedians on screen in a romantic comedy for Netflix. They are both involved in ABC’s sitcom Fresh Off The Boat which Wong writes for and Park stars in. Park previously filmed in Vancouver for The Interview with James Franco and Seth Rogen.

The Ali Wong / Randall Park movie is no longer untitled: now going by #AlwaysBeMyMaybe according to DGC. Filming in Vancouver and area from May 28 to July 6.

Their Fresh Off the Boat show runner Nahnatchka Khan makes her directorial debut in this movie. It is expected to shoot in town until July 6.

Keanus Reeves and Daniel Dae Kim have been added to the cast. Kim is known for his role in Lost and for being an Executive Producer behind the Vancouver-filmed medical drama The Good Doctor – which starts shooting Season 2 at the end of the month.

This untitled Bermuda Triangle is attached to Sam Esmail, the creator of Mr. Robot and newly wed to Emmy Rossum (Shameless). Skydance is the studio behind the film which has a massive facility in Surrey. Filming was last expected to start in May/June (previously earlier in the Spring). *now scheduled for September

Is Ryan Reynolds (@VanCityReynolds) returning to Vancouver this Fall to shoot #BermudaTriangle?
Sam Raimi's next movie was expected to start early this year in Vancouver & Hawaii but was pushed back.
Via @ProdWeek & @ThatHashtagShow
DETAILS: https://t.co/DDrbvKBlUt pic.twitter.com/ehFV3etC0a

Former executive producer and director of American Crime, John Ridley goes sci-fi in this time travelling movie based on a book. It films in Vancouver from June 18 to July 24. Starring Freida Pinto, Leslie Odom Jr and Orlando Bloom.

This drama films in Vancouver until July 3.

ALL MY TOMORROWS, a movie to be directed by Lance Hool, is #filming in Vancouver in March 2018. Join the crew thanks to USPN! pic.twitter.com/oFBaAeN1wK

This Disney family adventure-drama is being directed by Tom McCarthy who also directed the first two episodes of popular Netflix show 13 Reasons Why. It’s based on a novel and filmed in Louisiana with additional production in Vancouver from June 18 to July 27.

Tremblay has filmed a number of big movies locally including Wonder with Julia Roberts and Predator with Olivia Munn. Good Boys is about a 12 year old who skips school and has one hell of a day. It’s scheduled to film in town from July 9 to August 23. It’s slated for release next year on August 16, 2019.

Sonic is hitting the big screen on November 15, 2019 with a live-action and CGI animation movie. Filming and production is scheduled to start in Vancouver on July 30. Slated filming locations include, Vancouver, Coquitlam, Burnaby and New York City.

Some big stars are attached to big movies that have been slated to start filming in Vancouver this year. Both are still in development according to IMDb: The Personal History of Rachel Dupree starring Viola Davis and The Kimberlite Process starring Ben Kingsley.

More film news—@ViolaDavis will star in adaptation of THE PERSONAL HISTORY OF RACHEL DUPREE! https://t.co/KiR23NrjTh pic.twitter.com/FxzHTKax2e

Last month the 4th installment of Pup Stars wrapped up as well as the Indigenous Canadian drama Red Snow.