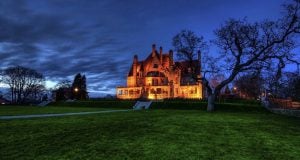 Craigdarroch Castle is one of Victoria’s greatest landmarks, but it’s also the source of several spooky stories.

With many residents having lived in this location, over the last century, people have claimed to see various apparitions.

That includes sightings of a woman in white who stands alone in the castle ballroom, the sounds of children crying and a piano that plays by itself.

RELATED: Haunted BC: 5 Places In Victoria With Stories That Will Give You Chills

People have also claimed to see a little girl running around the house along with a maid and a woman’s feet running down the stairs.

Located along Joan Crescent, Craigdarroch Castle was built in the late 1800’s as a family residence for the wealthy coal baron, Robert Dunsmere.

However, Dunsmuir died 17 months before the castle was complete, in 1890. His sons took over the role of finishing the home after his death.

The building later served as a military hospital, college, offices and the conservatory before it was repurposed into a historical museum in 1979.

For more interesting stories, head to our History section.