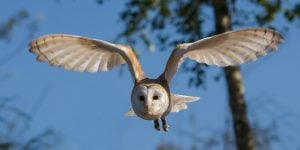 A aggressive owl is expected to be setting up territory in Tsawwassen, and the Delta Police are warning residents to be on the lookout.

The warning comes after three reported ‘Owl attack’ incidents on February 8 and 9, where residents claim the owl divebombed joggers.

RELATED: Canuck The Crow Gets Mail Delivery Cancelled To Vancouver Homes After Attack

According to a release, a female jogger was apparently attacked around 6 am February 9 in the 1700 block of 56A Street. The attack was reported when a concerned man went outside to investigate after hearing screams, and was dive bombed twice by an angry owl. Police were unable to locate the jogger, though another witness also reported seeing the woman apparently being attacked from above.

In a later incident a Delta resident reported her teenage son was attacked by a large owl while riding his bike through the South Delta Rec Centre parking lot the evening of February 8. The owl apparently grabbed onto the boy’s helmet as if it was trying to take it.

“Joggers and cyclists are recommended to pick a different route for the time being. And it seems they should avoid wearing toques or flashy head wear if travelling through that area,” says Cris Leykauf, public affairs coordinator for Delta Police.

It’s important to note that Delta is home a orphaned wildlife rehabilitation society, and therefore spotting owls in the area is not uncommon.

The breed of the owl is unknown at this time.

Police have not had any reports of injuries.