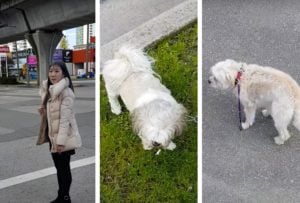 A video depicting the aftermath of a woman kicking a dog by Brentwood Mall has picked up over 200 comments on Reddit and over 500,000 views on YouTube since it was shared earlier this week.

The title of the video, “Burnaby dog kicker warning” shows what happens after a woman allegedly kicked a dog and is shown physically assaulting the owner.

RELATED: Opinion: Racism Still Exists in Canada, And It Sucks

The ‘Burnaby dog kicker’ recording has already prompted a police investigation into the matter and locals in the area have shared similar stories about a girl who has been walking around and kicking dogs near Brentwood Mall. Online speculation suggests that the woman may have been motivated by fraudulent injury claims in kicking the dog. By inviting and goading the chance of bodily harm onto herself by harming a stranger’s defenceless and small puppy, the anonymous woman would have had cause to claim psychological trauma, despite the fact that she had provoked the harm.

It is uncertain the cause of her actions, as the video begins after the alleged animal abuse, but the video does show erratic behaviour.

Unsurprisingly, negative comments have surfaced from those who express an “eye for an eye” point of view who believe that the original poster of the video should have physically attacked her. In essence, these commenters are taking the bait of the aforementioned popular theory among those who have seen the video.

It is a controversial video that’s sparked a lively debate among locals, revealing lowkey racist sentiments from those who remark on the role race plays for this potential scammer, citing how common injury claims are in China.