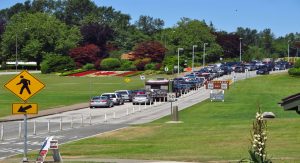 Our American neighbours will now be able to cross the border into Canadian soil starting this week..

Prime Minister Justin Trudeau met with premiers back in July to discuss having the Canadian-US border reopen sometime late summer.

However, the federal government seems to have expedited that timeline and confirmed the border will officially reopen on August 9th for fully vaccinated will be able to cross the border.

Ironically, the United States will not extend the courtesy back to Canadians until at least August 21st.

Similar to Canadians entering the country, American travellers will be required to submit proof of vaccination on the ArriveCAN app or on the online portal prior to arrival.

They will also need to provide a negative COVID-19 test result taken within 72 hours prior to entering Canada. With this, they will not need to undergo the hotel stay or 14-day quarantine anymore.

The next step of easing border measures begins on August 9. All travellers eligible to enter Canada must enter travel details and proof of vaccination via #ArriveCAN, if they’re fully vaccinated, before entering Canada. https://t.co/nTgbEX6CYD pic.twitter.com/WKCZaVuegO

Children under the age of 12 travelling with their family will also be allowed to skip quarantine. However, children over 5 are still be required to take a COVID-19 test upon arrival, plus another one eight days later.

Since the official announcement, several travel websites reported spikes in thousands of Americans booking recreational travel in Canada this month. That being said, you will likely come across a lot of American license plates in the near future.

Following Trudeau’s statement, BC Premier John Horgan spoke at a news conference to support the decision. He claims that although reopening the border would be a “massive undertaking”, it is one that he feel that the province is ready for.

The border between the two countries has been closed to non-essential travel since March 21, 2020.

Travel between the countries to allow for the border to reopen is something many have been waiting for. However, a recent strike notice by CBSA workers at the border may complicate things. The job action begins August 6 and the union representing the employees warns travellers should expect long lineups and lengthy delays at border crossings and airports.

Moving forward in September, depending on whether a fourth wave hits, the government is planning to reopen the country’s border to fully vaccinated travellers from the rest of the world.