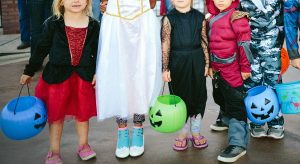 However for some, this is not an easy act to accomplish. For kids with autism, sometimes it’s difficult to speak or communicate on the spot and the words “trick or treat” do not come out. Non-verbal autism is real and it’s not always understood.

As such the blue buckets trend has started which helps alert that someone has autism.

About the Halloween Blue Buckets

Many parents have gotten blue buckets after experiences where their non-verbal child was at a door step while someone was asking them to say the words “trick or treat” and it became stressful. For those parents, this may be something the family decides works for them.

Although this has taken off in the United States, Autism Canada doesn’t endorse this act for fear it may single out a child for having autism in the first place.

For some parents that have children with autism, they want to raise awareness and not hide it. Some have stated they do not want to have their child subjected to things they cannot do easily and take off some of the pressure of what has been deemed “normal” to date.

On the other side of the spectrum many say they do not want to disclose that they have a condition. As well that people should accept differences in children without expecting them to speak.

In addition, you may see some adults with blue buckets. This is because for some autistic adults, they may look like an adult on the outside, however still love the spirit of Halloween as such shouldn’t be treated any different.

Blue buckets for autism may be fairly new, however coloured buckets for Halloween are not.

There are teal buckets available that signify food allergies, gluten allergies and to show a child cannot have a “treat.”

As times are changing some of these traditions are too. Perhaps the issue is more about awareness in general, and one day we won’t need coloured buckets.

Whether you want to have a coloured pumpkin bucket or not, every child deserves to have a fun and relaxing experience every Halloween.