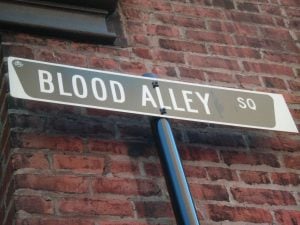 While it sounds rather disconcerting, no one is sure exactly how Vancouver’s Blood Alley got its name. With that being said, some of its origins may lie in blood; however, they aren’t of the human kind.

The famous alley was said to be home to a number of the city’s finest butchers, whose work would paint the streets red. With that being said, no one is sure if this why the passage got its name.

In fact, this title isn’t even its real name, which is Trounce Alley. What most historians settle on, however, is that the nickname “Blood Alley” appeared around 1970.

“The name “Trounce Alley” didn’t have the allure they were looking for, so they began calling it Blood Alley and introduced myths that the name derived from blood flowing from slaughterhouses in the alley. Alternatively, some claimed that hangings once took place there and inspired the name. Neither story is true (hangings all took place in New Westminster and there were no abattoirs),” reports Forbidden Vancouver.

Interestingly, it was also Vancouver’s first alley, and home to a number of local businesses. In fact, there were even stables and a broom factory.

Canadian tacos exist and they are DELICIOUS. The chicken taco was 👌. #inpursuitof #yvr #vancouver #bloodalley #howladventures

Today, the popular backstreet is located between Water and Cordova streets, running from Carrall to Cambie; however, it technically only refers to the cobblestoned Blood Alley Square. With that being said, most people consider the alley in its entirety to be part of it.

The passageway offers a plethora of unique and renowned dining experiences, as well as local shopping. In addition, tourists enjoy walking tours through its cobblestoned path, and learning about its long and fascinating history.