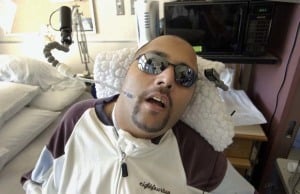 Gang hitman and blind quadriplegic Bal Buttar, who for years terrorized rivals across the Lower Mainland, has died after suffering an infection in a long-term care facility. Funeral services for Buttar, 35, were held quietly Wednesday at a crematorium.

Buttar, who was paralyzed in an August 2001 Vancouver shooting, turned to a Sun reporter in 2004 and confessed to a string of gangland hits. He admitted he arranged the execution of notorious cocaine trafficker Bindy Johal, his own crime boss at the time, fearing Johal would turn on him if he didn’t kill first. Buttar claimed he found God and wanted to steer kids away from the path he had chosen. And he said he didn’t fear the consequence of his confessions because his severe medical needs meant he couldn’t go to jail.

He was never charged in any of the murders.

Buttar’s reformation didn’t last long. In 2007, despite being bed-ridden and hospitalized, he attempted to arrange a hitman for an acquaintance who wanted to kill her husband. Earlier this year, he pleaded guilty in that case.

Police are calling the drawn-out demise of the notorious gangster the end of an era.

They said the ruthless way Johal, Buttar and their contemporaries dealt with each other in the 1990s spurred on the current generation of violent gangsters who take to public streets to resolve their conflicts.

“He was there right at the start of the real gang issue in the Lower Mainland,” Supt. Tom McCluskie, head of the Gang Task Force, said of Buttar. “In his day, he was also a very violent individual.”

McCluskie, a longtime Vancouver police officer, dealt with Buttar and his brothers Manny and Kelly, many times, going back to the mid-1990s.

Kelly Buttar was gunned down in December 2001, while Manny is currently before the courts on a number of charges.

“Bal and his brother were actively involved in some very serious incidents back in my Vancouver days. Kidnappings and extortions,” McCluskie said. “He seemed to be at the centre of a lot of the crime that was going on at the time in the Lower Mainland.”

Const. Doug Spencer also had many dealings with Buttar during his years as a VPD gang specialist.

“I know he was an extremely violent hitman who did all of Bindy’s collecting and killing — self-admitted — he carried a reputation all over the Lower Mainland. Everyone knew him,” Spencer said.

After his catastrophic injuries, “he went from this absolutely tough, untouchable guy to just a mere crumble of what he used to be.”

Spencer heard from officers who guarded Buttar in hospital that the gangster had tears streaming down his face every morning after he learned his brother had been killed.

Buttar grew up in Richmond, B.C., and was involved in petty crime as a teenager. But his criminal career heated up after he became a cellmate of Johal’s in early 1997.

In a series of interviews conducted between 2004 and 2007, Buttar not only admitted to killing Johal, but also said he was involved in the July 1998 Vancouver murder of Vinuse News MacKenzie, the unsuccessful October 1998 attempt on Johal associate Peter Gill’s life, the September 1999 hits on Kuldip Singh and Vikash Naidu in Richmond, the March 2002 slaying of Jaskaran Singh Chima and the June 2002 murder of high-profile gangster Robbie Kandola outside his Coal Harbour apartment.

He lived his final years in a long-term care facility, listening to shows on television and receiving very few visitors. He told the Vancouver Sun he still had bullet fragments embedded in his brain. His speech was often slurred and he struggled to move his head from side to side.

Spencer, who does presentations to students about the dangers of gang life, said Buttar was the poster child of the worst possible fate.

“He was living an existence worse than death,” Spencer said.

Buttar’s gang was “the first that went right out there and was ripping off other drug dealers on a regular basis,” Spencer said. “They also started a taxing thing — if you didn’t pay them tax, you couldn’t sell drugs in their area.”

Many of the gangsters engaged in the violent lifestyle today wanted to be Johal and Buttar, Spencer said.

“That’s who they were aspiring to be. And now a second generation of them are starting to suffer the same consequences — death, jail, drug addiction,” he said.