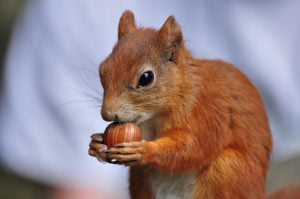 When Holly Persic smelled something burning coming from the hood of her car, she did not expect to find more than 200 walnuts stashed inside.

“They were everywhere, under the battery, near the radiator fan,” said her partner Chris Persic to CTV News. “The walnuts on the engine block were black and smelt like they were definitely roasting.”

Holly had recently taken her in for a check-up, and hadn’t looked under the hood since. But that was merely weeks before the couple discovered the squirrels‘ secret stash.

With that many walnuts and that much grass inside the car, it took a full hour to clean before they brought it to an auto repair shop.

There were enough walnuts to fill half a trash can and the mechanics found even more that the couple couldn’t reach themselves.

The grass was damp thankfully, as a fire could’ve been started otherwise, says Persic.

Luckily, there was no damage to the car.

“Long story short, if you park outside, do yourself a favour and check under the hood every once in awhile,” Chris wrote on Facebook.