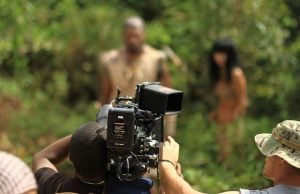 It’s pilot season! There’s an eclectic mix of television pilots being filmed in and around Vancouver this month ranging from end-of-world scenarios to budding crime-solving partners.

Could the next big hit TV series be one of these Vancouver pilot productions? Any or all of these could get the green light orders by their networks and be filmed locally going forward.

Out from Under the Dome and into a real doomsday situation, Montreal’s Rachelle Lefevre stars in Doomsday. It centres around a secret think tank established after 9/11 to brainstorm all the possible doomsday situations – one of which occurs.

A thriller about an uber cool virtual reality program gone sideways. The pilot is produced by Steven Spielberg’s Amblin TV and Universal TV.

After a brief stint on CBS’s MacGyver reboot, Sandrine Holt lands the female lead in The Crossing alongside Steve Zahn. The show revolves around American refugees seeking asylum… in America… because they’re from 250 years in the future. And in the “future” America is a war-torn country.

What happens when you combine a 2013 Korean drama series, the creator of House and Daniel Dae Kim (Lost, Hawaii 5-0)? You create The Good Doctor. It stars Freddie Highmore known for Bates Motel which filmed locally and Nicholas Gonzalez from How To Get Away With Murder.

Michael Cudlitz might be a little typecast as he played a cop in Southland, solider in The Walking Dead and now police captain in The Trustee. The female buddy cop comedy star’s Montreal’s Meghan Rath as a detective teamed up with an ex-con.