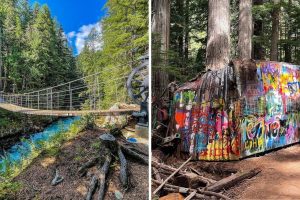 Explore the great outdoors by hitting this trail that also happens to have a mysterious story behind it.

The Whistler Train Wreck Trail is one of the most popular outdoor attractions in the area and it’s easy to see why.

RELATED: This Secret BC Hike Takes You Up To A Giant Wooden Sculpture

It boasts incredible views of the Cheakamus River and has colourful train cars scattered across the forest floor.

For many years, those who stumbled upon the crash were confused, as there were no tracks near by, and old trees has already grown all around it. Since the area was not populated, there were no newspapers documenting the event.

During the 1950s, train wrecks were not a rare occurrence. The rail line was the only direct way to move natural resources and people between Squamish and Lillooet. Trains in transit often shifted and wobbled to the point where one car would eventually jump the tracks, bringing the remaining cars along with it.

It wasn’t until 2014, that the details of the crash was revealed. The train derailed on Aug. 11, 1956. It was filled with lumber and was running behind schedule, so the crew tried to make up time by going faster.

The cars have been left in the wilderness for decades now, delighting hikers who come across their path.

Locals even took it upon themselves to transform the historic train cars into a piece of art with graffiti. Due to this creative approach, each train car has its own unique touch.

The two-kilometre round-trip hike also crosses over a scenic suspension bridge, offering up sweeping views of the region.

When: Accessible May through November

Where: Near Function Junction in Whistler

For more incredible destinations to explore in the province, check out our Travel & Outdoor section.