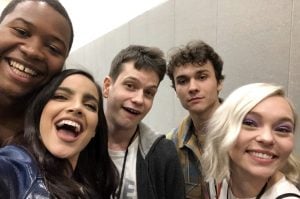 Vancouver-filmed teen drama series Deadly Class just got axed from cable television by Syfy channel. The show, based on a comic book series of the same name, is set in the late 80’s and centers around a private school for the off spring of crime families.

In addition to filming Deadly Class in Vancouver, Lana Condor has also filmed the first two movies in the To All The Boys I’ve Loved Before series in town. The third is slated for filming in in Vancouver and New York City. Similarly, Kelowna’s Taylor Hickson who plays Petra in Deadly Class has filmed other shows in Vancouver such as Aftermath and a new one called Motherland: Fort Salem.

Yes, #DeadlyClass has been canceled by syfy and although we were heartbroken at first we see this as an opportunity to find our forever home with another network. How many of you are dying to see what happens next with our heroes? RT and use the HT #DeadlyClass #SaveDeadlyClass

Guess the cats out of the bag. Thank you guys for being amazing fans. It ain’t over tho! #sony stills gots us! #deadlyclass fans plz help us make some noise. We’re on the look out for another network. Let’s show em we people still want to watch this story unfold. Love y’all!

Bad news: Deadly Class has been cancelled by SYFY. Sorry guys. I got some good news though: Sony is out here tryna sell it to a network that believes in it and believes in our fans. I personally do have a preference… Everyone out here just at @netflix to be our new home 😁 pic.twitter.com/ukz3og9imn

thank you so much to everyone who followed our series. watching with you every week was a highlight. i fell in love with this show and the people who made it. thank you. from the bottom of our black hearts🖤 @DeadlyClassSYFY #deadlyclass pic.twitter.com/SFVVR88dhv

#deadlyclass is on the lookout for a new home.

i think @netflix would be an amazing fit considering our content! let your favourite streaming service know to #savedeadlyclass 🖤🔥💣
let’s make a season 2!⚔️ pic.twitter.com/a0pkq2gW19

1.Hey Everyone, I have super unfortunate news that SYFY is cancelling #Deadlyclass This show is not about superhero’s, it’s about showing we can be super human. It’s an important message and a hell of a lot of fun. pic.twitter.com/OHd5Xq86wL

Wow… #deadlyclass is trending #1 in Canada!? You guys are unbelievable!

Sony, the production company and distributor behind the series, is in search of finding the dark and edgy series a new home. While the show gets shopped around the cast and fans have taken to social media to try and create buzz around it with #DeadlyClass and #SaveDeadlyClass

Many are hoping the likes of Netflix, Hulu or Amazon will take the show on. This wouldn’t be the first time a Vancouver-filmed show has been cancelled and brought back to life by Netflix as both Lucifer and The Killing were reincarnated by the streaming giant.