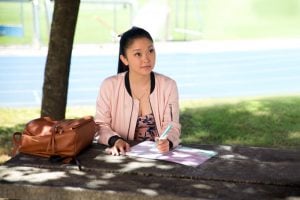 Lana Condor made her acting debut as Jubilee in 2016’s X:Men: Apocalypse and found her first lead role in Netflix’s 2018 film adaptation of To All the Boys I’ve Loved Before.

Just out here, still hype as ever!!! https://t.co/csfOyktiMH

She will be reprising her role as Lara Jean opposite Noah Centineo’s Peter in the highly anticipated teen romance sequel. The second adaptation film will follow the second book written by author Jenny Han. The first movie filmed in Vancouver and Portland in the summer of 2017 and dropped on Netflix the following year on August 17, 2018.

Point Grey Secondary School in Vancouver was used as the high school. The popular filming location is also famous for spawning the likes of Seth Rogen and Adam Goldberg. They even named their independent film production company after it, Point Grey Pictures, as it’s where the comedy writing and production partners first met.

Condor was born in Vietnam and adopted by American parents when she was 6 months old. She may as well be Canadian too as she’s spent a lot of her acting career in Hollywood North. After filming X:Men in Montreal, she found herself filming the first To All the Boys I Loved Before film in Vancouver.

She never misses. Stream this week's episode of #DeadlyClass, online and On Demand at the link in bio.

Soon after she landed the main role of Saya Kuroki on Syfy’s Deadly Class, an action drama-series adapted from the comics of the same name. It filmed in Vancovuer during the second half of 2018 and premiered its first season on December 30th.

Now she finds more work in Vancouver with the sequel to To All the Boys I Loved Before filming here. Pre-production is currently underway with filming scheduled to start in Vancouver on March 25th.