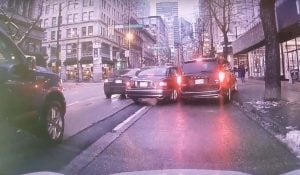 We all know driving in downtown can be a living hell, but for two Vancouver drivers, it got even worse.

A video uploaded to YouTube shows a driver trying to merge in front of a Dodge Caravan, but instead collides with it.

The Dodge Caravan was driving in the far right lane at the intersection of Richards and West Hastings Street in Vancouver.

As the car tries to merge in front of the Caravan, it instead hits the van and forces it up on to the sidewalk.

Take a look for yourself:

Just last week, another driver in Burnaby hit a pole with their car, which then went airborne.