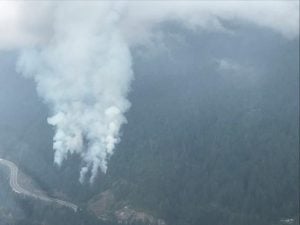 On Sunday morning, a wildfire broke out along Highway 99, the Sea-to-Sky corridor near Vancouver. As of Monday morning the Strip Creek wildfire is still burning and the BC Wildfire Service lists the blaze as out of control.

The fire is approximately three hectares in size and is burning 4.5 km south of Lions Bay.

At approximately 7:30 a.m. this morning, Metro Vancouver Regional District Emergency Services said that crews worked the fire overnight and will continue to attack it today.

Officials also stated that there’s “NO threat to residents in the area, but Hwy is still restricted to 2 lanes for safety”.

The Strip Creek wildfire continues to burn alongside #hwy99, @MetroVancouver crews worked the fire overnight and @BCGovFireInfo crews will continue the attack today. NO threat to residents in the area, but Hwy is still restricted to 2 lanes for safety. #BCWildfire pic.twitter.com/45O5bqEXdD

No structures are currently threatened and the cause of the fire is still under investigation.

According to Squamish RCMP, only one lane is open in each direction on Highway 99.

Fire Crews are back tackling The Strip Creek #BCwildfire south of Lions Bay. #BCHwy99 traffic has one lane NB and one SB. The fire is still active and planes and helicopters will be in the area throughout the day. @MillerCapilano @WestVanPolice @BCGovFireInfo @SeatoSkyHighway

Drivers should expect delays throughout the day as planes and helicopters will be in the area.

For updates, visit the BC Wildfire Service website here.