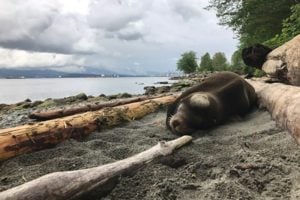 The Rescue Centre found him on Friday, May 5th from the beach at Spanish Banks.

What they discovered was quite grim. The sea lion suffered injuries inflicted by gunshots to his face, likely from a small-calibre gun.  According to reports, he was took least two bullets to the face, shattering his teeth, blinding him in one eye, and possibly hitting his optic nerve.

The Rescue Centre was alerted by reports about the adult male sea lion last Friday.

The team responded to him and was able to transport him back to the Marine Mammal Research Centre for treatment.

After stabilizing him, the veterinary team gave the animal a full exam under general anesthetic on Tuesday. They also named him Senor Cinco which marks his rescue date (Cinco de Mayo).

“The injuries he sustained at the hands of humans left him in pain and unable to forage on his own. We’re happy we can ease his suffering, but he has a long road to recovery ahead,” said Dr. Martin Haulena, head veterinarian at the Vancouver Aquarium and director of the Marine Mammal Rescue Centre.

It is still unknown if Senor Cinco will be released back into the wild or if he will require long-term care.