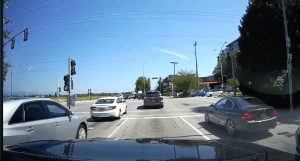 Red usually means stop, but this driver appeared to be in quite the rush. A video uploaded to Facebook shows a Richmond driver crossing an intersection on a red light.

The incident took place at the intersection of Number 3 Road and Garden City Road in Richmond.

It appears like the driver might’ve been confused by the green left turn signal that flashed and nearly hit a car that was making a left turn.

“Just happened, from my dash cam😂😂😂” reads the video cation.

The driver of the Toyota Sienna quickly realized their mistake and reversed backwards before any accident was caused.

As for this local driver, they thought of quite a reckless way of making a right turn directly in front of another car.