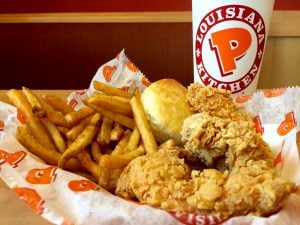 Get ready chicken-lovers, because Popeyes Louisiana Kitchen has quietly opened up another location in B.C., this time in Abbotsford.

The popular American chain opened up a new restaurant this past weekend on Marshall Road.

The spot will serve many of its top choices, tossed in its signature Louisiana spices. But just like the other B.C. locations, it still won’t have their famous chicken sandwich.

The sandwich is described as the “Air Jordan of chicken sandwiches,” by Popeyes president Felipe Athayde. But it is only available in the U.S.. For now.

The meal item was first introduced in American stores this past August, taking over the United States.

People tweeted about it incessantly, with one person saying, “Live report from husband, who is sitting in neighborhood Popeyes drive-thru: “It looks like Armageddon.”

A robber held up a Popeyes at gunpoint demanding chicken sandwiches. The company later announced that the sandwiches were completely sold out across the country, but recently announced its return.

There are now six locations in B.C., including ones in Surrey, Port Coquitlam and now, Abbotsford.