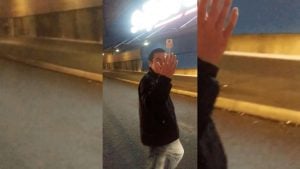 A man has allegedly been faking motor vehicle injuries in parking lots in order to make false claims through ICBC.

A woman captured footage in a Metrotown parking lot of the man claiming that he was hurt. When she confronts him, however, he reacts in anger. She posted a video to Reddit and wrote a brief account of the incident.

(if viewing on mobile, tap the video to enlarge it and watch)

“A couple of days ago I was backing out of Metrotown parking lot and I heard a knocking like sounds at the back of my car, I have a backup camera! I got out of the car and saw this guy pretending to be hurt, the first thing he said was do you want to call ICBC or settle… I immediately knew it was a scammer and started taking photos and called the cops shortly after. He started to book it when he saw we were calling the cops. Now my co-worker said the same guy is doing the same scam in Richmond and the guy in Richmond actually paid him a $100”

The second video shows the suspect in Richmond, where he is purportedly running the same scam. The man says he will settle for $100 so that they do not have to involve ICBC.