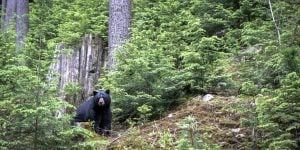 A group of three mountain bikers narrowly escaped a black bear as it chased them for more than five minutes on a popular Mount Seymour trail.

The men decided to try the TNT trail on Mount Seymour, on September 27th. When they stopped to take a break, they noticed a black bear not too far behind them. And then it began charging.

“I look back and then all of a sudden the bear is another 30 feet closer and running at us,” said one of the bikers, Brad Martyn, to CBC.

The group thought they had lost the wild animal about a km down the trail, until they saw it emerge from some bushes.

They changed plans and held the bikes over their heads and started yelling – a tactic recommended for deterring bears.

“Some bears are curious in nature and by running away or biking away it can trigger some instinctive behaviour from the bear and it’s very common to see them following people,” said Sea-to-Sky region supervisor Sgt. Simon Gravel to CTV News.

Martyn had captured the chase from the GoPro mounted to his helmet.

He posted the video on YouTube with the message, “We’re all safe. It’s a good story. A little scary.”