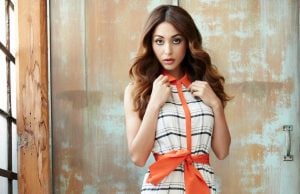 What’s Lindsey Morgan, a Texan of Mexican and Irish descent doing in Vancouver? Starring in the locally filmed post-apocalyptic action-drama The 100 on CW of course! The main cast represents actors from Canada, America, Australia, Korea, Peru and the UK.

Lindsey Morgan joined season 1 with a recurring role and was bumped to a series regular by season 2. She plays mechanic and “badass” Raven Reyes amongst a diverse cast in a dystopian setting almost 97 years after the Earth is nuclear-ravaged. While the fourth season is currently underway we asked Lindsey about The 100 and her acting career:

What drew you into acting and how did you pursue it?

As a kid, I was always very artistic and felt truly myself whenever I was being creative. I did not really start pursuing acting until I was 18 and honestly, it was just a moment of hearing and following my heart’s deepest desire.

What did the recurring role of Kristina Davis on “General Hospital” teach you as a young actress?

It taught me in this industry, you can either sink or swim. There is not anyone there to hold your hand and it is up to you keep yourself afloat. The soap was a tremendous amount of work for a new actor and it taught me how much I needed to practice my craft and be ready to perform day in and day out. It also taught me gratitude to have a steady job, in a very unstable profession and industry.

How do daytime soap operas differ from primetime TV series?

We shoot by far more material in Soaps than Primetime. A big day on a Soap can be shooting up to 80 script pages. A page day on Primetime is filming 8 script pages, but we repeat takes in Primetime. In Soaps, we strive for one take then move on.

Aside from traditional film and television, you’ve also been in short films, TV movies and web series productions – do you have a favourite medium?

At this point, I am trying to explore everything I can and master it all. They are all very different mediums and have different styles that I think it is important as an actor to understand.

It is amazing! I love everyone on our cast and love how we are all from such different parts of the world with different backgrounds. Everyone is pretty fascinating to get to know.

What about the show first interested you most? Were you already a sci-fi fan?

I was more of a fan of Fantasy, but it really opened my eyes to the creativity of Sci-Fi. The show has turned me into a fan. Initially though, I did love the premise. I thought it was socially very interesting!

Do you share any characteristics with your mechanic character Raven Reyes?

Yes, definitely. We both can be a bit too stubborn and competitive for our own good, but it also pushes us to constantly to do our best and grow as a person.

What do you do for fun in Vancouver when not filming?

We have really grown close as a cast, so we always get into something crazy. From paddle boarding in the summer, to snowboarding in the winter and laser tag, we always have something fun going on. When I am alone I have been learning Muay Thai kickboxing or I am in acting class!

take your broken heart, make it into art

Train. Acting is like anything you want to do well. Practice as much as you can. It is the only way you will ever get better.