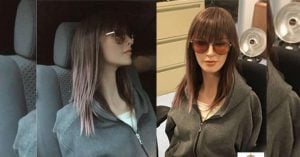 A driver was pulled over on Monday, February 6th, and he had a very unusual passenger with him.

“Port Mann Traffic Services were on routine patrol on Highway 1 through the Langley/Surrey border when a vehicle, allegedly traveling well over the posted speed limit caught the officer’s eye. The vehicle changed lanes without signalling and crossed over the solid white line into the High Occupancy Vehicle (HOV) lane where it was stopped by police,” the RCMP state in a release.

Once the officer pulled the driver over, however, things got decidedly odd.

It turns out, the driver had a mannequin riding in the passenger seat.

RELATED: Not 1, Not 2, But 3 Richmond Drivers Wildly Cut Through Intersection (Video)

In order to drive in the HOV lane, drivers must have a minimum of two people in their vehicle. As a result, this driver thought they would cleverly avoid the patrolling police offers.

Not only did the driver get caught, but the mannequin was seized by enforcement to prevent future attempts. In addition, the driver was given a number of fines for various infractions.