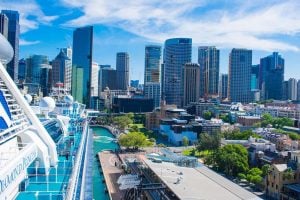 While there are usually a number of inexpensive flight deals out of Vancouver, cruise deals are less common.

With that being said, the cruise industry is booming in Vancouver, and there are a number of wonderful sailings out of the port city.

For example, an incredible world voyage departs Vancouver on September 25th in and finishes in Los Angeles on December 21st. Not only does it visit an incredible 36 ports of call over the course of 87 nights, but it does so in style.

There’s a movie theatre on board, broadway level theatrical performances, award winning chefs, 12 bars, a tennis court, basketball court, 4 swimming pools and 2 hot tubs. What’s more, the ship itself is a work of art that features an elegant decor with mahogany furnishings, chandeliers and a nautical collection of art.

Of course, this cruise isn’t exactly in every Vancouverite’s price range. Not only are most BC residents living pay cheque to pay cheque, but many people consider leaving Vancouver due to affordability.

Luckily, we’ve compiled a list of the best cruise deals that will sail you out of raincouver for a steal.

Although it is the largest ship to visit Vancouver’s waters, and one of the largest ships in the world, this 5 day cruise starts at very low fares. In fact, the fares start at just $534 CAD per person before tax. Of course, there are a couple of cheaper pacific coastal cruises, but some of them are four, rather than five days. In addition, they don’t offer this level of luxury.

Not only does it soar an incredible 20 decks, but it is the length of three football fields. In addition, the stunning ship accommodates 4,200 passengers and 1,500 crew members. As such, the mega-ship truly resembles a floating city. If that isn’t enough, the beautiful Bliss has a two-level go kart track, multi level waterslides, broadway level entertainment, a multi-level water slide, 29 restaurants, and much more.

This incredible deal from Holland America Line sails you to San Diego and Disneyland on a budget. Specifically, the total cost comes to $407.20 CAD including tax per person based on a double occupancy for an interior cabin.

This includes all of your meals, snacks, entertainment, and lodgings. It does not include alcohol, but you are able to purchase a drink package that could help bring down the cost of that expense.

While the Norwegian Bliss is a spectacular vessel, sailing with Princess is a truly elegant experience. What’s more, this phenomenal deal is only $257.70 CAD per person before tax!

If that isn’t enough, this ship is a luxury accommodation with amenities galore. It offers the famous Theatre Under the Stars, broadway level theatrical performances, award winning chefs, 12 bars, a mini-golf course, basketball court, 4 swimming pools and 8 hot tubs.

A flight back from LA is also very affordable. A one way fare won’t cost over $150 CAD as long as it’s booked in advance.

It may sound hard to believe, but this 14 night voyage across the Pacific Ocean to Japan only costs $658 CAD per person before tax – wow! Considering that a plane ticket to Japan would cost roughly the same, but not include  all of your meals, snacks, entertainment, and lodgings for 2 weeks, this deal is truly remarkable.

With that being said, not everyone is a fan of multiple days at sea in a row; however, the ship resembles a floating hotel, and the service is excellent. You won’t long for better treatment or accommodation.

Last year, the Port of Vancouver welcomed 842,928 cruise passengers on 236 vessel visits. This reflects a 2% growth since 2016. Each ship brings an average of $3 million to the local economy.

Of course, when these ships disembark in the waterfront area, all within mere hours of one another, you can expect a great deal of foot traffic. In addition, the area will be flooded with taxis, as well shuttles and other vehicles.

Travel Tip: Always book your cruising excursions in advance! You only have a certain amount of time in each port and you want to make the most of your time to be sure to have a plan ready. You can book these activities through the cruise line or make plans yourself, but if you make them with the ship then you are guaranteed a stressless return to your cabin – always a good call when on holiday.