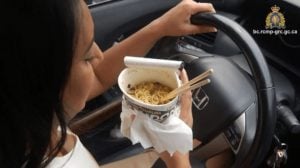 Back on November 7th, 2018, a BC driver was caught eating ramen with chopsticks on Highway 33 in Kelowna, British Columbia.

Yes you read that right. Ramen. With chopsticks.

According to court documents, she had a bowl in her left hand and chop sticks in her right hand.

“She was actively eating using the chopsticks”.

Corinne Marla Jackson claims she “had one hand on the wheel and that she was eating with the other hand while driving”. Ms. Jackson says she was able to still pay attention to her driving even though she was eating.

“I am not finding that a person who is eating while driving is driving without due care and attention”. Burgess does say though that “a reasonable and prudent person, as implied by the Crown, would be to have at least one full hand on the steering wheel while the vehicle being driven is in motion”.

Cst. Neid responded to this incident back in 2018 and said he “observed that the driver had a bowl in her left hand” and that there were “chopsticks in the driver’s right hand which she was using to put food into her mouth”.

In court documents, Cst. Neid described the action of the chopsticks as “shovelling” the food.

Distracted Driving In BC

Next time you decide to eat behind the wheel, consider the consequences.

According to BC Driving Lawyers, “as a driver, you have a responsibility to ensure that you are exercising all the care and attention necessary to be a safe road user. Case law has stated that driving without due care and attention focuses on the manner in which a vehicle is operated.”

In the tweet they chose to highlight soup, as it is obviously one of poorer foods to attempt to manage while behind the wheel. But, it should be noted that there are myriad foods that may put you out a large sum of money – $368 to be exact.

#DYK you can’t eat a bowl of soup while driving? Drive without due care= $368 Fine + 6 points #TicketTuesday pic.twitter.com/TlOXWtvgOW

B.C.’s Motor Vehicle Act clearly states that you must not drive a motor vehicle on a highway without due care and attention.

She has until the end of October to pay the $368 fine.

Here’s 5 surprising BC traffic tickets you probably didn’t know about that’s important to keep in mind.