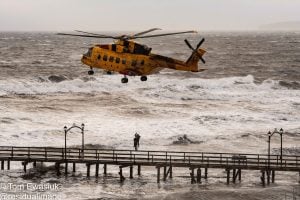 Environment Canada originally forecasted wind gusts of up to 100 km/h for Thursday, but the gusts came in stronger than ever.

YVR had to delay flights. BC Ferries were forced to cancel all sailings, and both were good calls. The strong winds caused havoc across the region and managed destroyed the historic White Rock Pier.

The strong winds also forced two Vancouver parks to close and knocked out power to thousands of BC Hydro customers.

Not to mention, the chaotic conditions outside also forced a helicopter rescue in White Rock.

As of Friday morning, no weather alerts have been issued by Environment Canada.