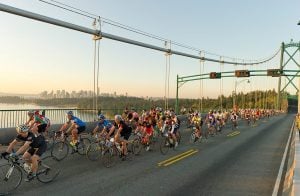 Heads up drivers! Huge delays between Vancouver and Whistler are expected this weekend due to the RBC GranFondo Whistler.

Drivers should be ready for possible delays of up to three hours between West Vancouver and Whistler on Saturday, September 7th between 5:30 a.m. and 4:30 p.m.

The RBC GranFondo Whistler bike ride will have cyclists travel over the Lions Gate Bridge, up Taylor Way and Cypress Bowl Road, along the Upper Levels Highway 1 and Highway 99, and will finish in Whistler.

Here are the following traffic changes, detours and delays that will be in effect:

If you’re looking to get outdoors yourself this weekend, here are some easy hikes anyone can take on.