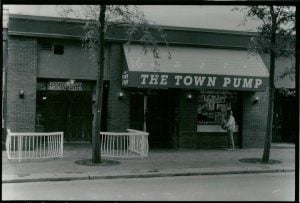 Styles change and some say that is why The Town Pump died.

But before the era of multimillion dollar liquor licenses and Donnelly Bars for days, Vancouver had a lot more independent venues, the Pump being one.

RELATED: A Look Back At Vancouver’s Most Popular Bars From the 80s, 90s, and 00s

Nirvana and Tragically Hip both played their first Vancouver shows there.

No Doubt also played there, Alice In Chains, Wesley Willis, Sublime and the Dayglo Abortions did too, to name a few.

These weren’t massive arena shows either, with a designated seat, and security guards everywhere. These were bar shows, where the band mingled with the crowd after the show.

Just because a band played there, didn’t mean they made it big, but having a mix of obscure bands and rising stars marks an artist’s space. A place where culture germinates and actually grows.

But fans of the venue say that when dance music rose in popularity, the Town Pump couldn’t draw the crowds it needed to stay open. Some nights were packed, but many were empty. When the empty nights became too many, the bar then closed.