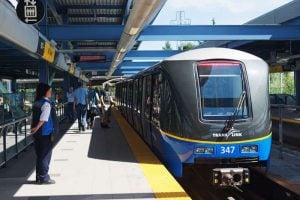 The SkyTrain shutdown slated for today has been avoided, thanks to a last minute deal struck Tuesday morning.

TransLink and SkyTrain workers union CUPE 7000 reached a tentative deal just before 5 am, when the strike was meant to start.

“It’s been a very long night for myself and the rest of our crew behind me and we are glad that we were able to come to an agreement,” said CUPE 7000 president Tony Rebelo. “The details of the agreement will not be released until we have a ratification vote with our members.”

The union, representing 900 workers, gave its 72-hour-strike notice on Friday. That meant there would be no SkyTrain services Tuesday-Thursday, if a deal wasn’t met on time.

Thankfully, one was, in a bargaining session that reportedly lasted 18 hours. However, Rebelo said there may be some delays as SkyTrain services get back on track.

SkyTrain workers haven’t had a contract since August 31, and have been negotiating since.

“We have been either at the table or in mediation for almost 50 days now, so it’s time to get a deal done,” said Rebelo in an earlier statement.

The union was fighting for better wages, staffing levels, sick time and were against forced overtime.

Do you think SkyTrain services should be considered essential and exempt for disruptions?