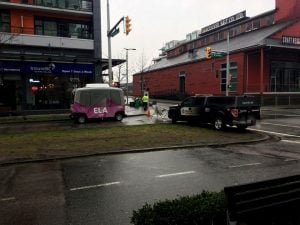 When The Electric Automation (ELA) brought the EZ10 Driverless Shuttle to Vancouver and Surrey for test rides, it sounded exciting.

A driverless shuttle? Think of the possibilities!

RELATED: Complaints Against This Vancouver Cab Company Have Skyrocketed

However, one Reddit user is pointing out some issues they’ve observed about the shuttle.Reddit user, ivancurtis commented that they are “slower than walking.”

Ivancurtis also said the shuttles “run red lights, require police supervision at crosswalks and intersections” and that it feels like we’re “decades away from self-driving card.”

Other users quickly chimed in with their opinions about driverless shuttles:

As far as these test rides go, the company did point out, although the shuttle can go at a speed of 40 km/h, it will only operate at a speed of 12 km/h for public safety reasons.

The shuttles also use sensors, video cameras and computers to gauge their surrounding environment.

Maybe these shuttles have some kinks that need to be worked out or maybe the future isn’t as close as we thought it was.

One thing is for sure, the online public will be watching…and commenting.