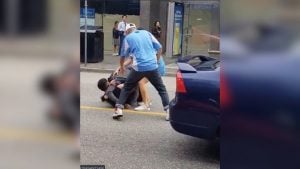 It can be hard to keep your emotions in check while driving on the road sometimes and an apparent instance of road rage on Robson Street in Vancouver is another example of that.

A video uploaded to YouTube shows a road rage incident between two drivers in Vancouver that resulted in a literal street fight.

The driver of a blue Honda Civic and his passenger both started tussling with another man on the road, who was with his girlfriend.

“Stop fighting!”, yells the woman repeatedly throughout the incident.

It’s unclear what started the dispute, but the video shows two men punching and throwing the other man to the ground.

At one point a Caucasian male standing on the side of the road comes and tells the two men ganging up on the other man to fight “one guy at a time.” The female says “yeah fight fair you’re hitting my boyfriend!”

The video concludes with the driver of the blue Honda Civic and his passenger getting back in and leaving.