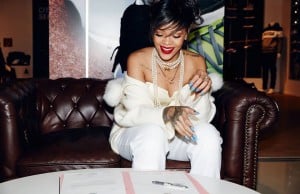 Big news came out of Comic-Con in San Diego from recording artist Rihanna who wasn’t even in attendance. Producers and the superstar made a big announcement that she would be checking into the fifth and final season of A&E’s popular prequel series Bates Motel.

Riri is set to play the monumental character of Marion Crane – from the infamous shower murder scene.

.@rihanna to check into #BatesMotel as Marion Crane in the 5th and final season!https://t.co/7t2pRL43cf

This isn’t the first time celebrity fans of popular television shows have found their way on the small screen. Lady Gaga earned praise for her role in American Horror Story and Ashley Tisdale got a cameo in Sons of Anarchy. Grammy winner Rihanna is no stranger to the screen as she appeared in the 2012 sci-fi action flick Battleship.

Since its inception, the psychological drama has been nominated for several awards as is currently up for a pair of Primetime Emmy Awards for cinematography with single-camera and music composition.

The show is one of Metro Vancouver’s most recognized productions as it mostly films in Aldergrove and other parts of the Fraser Valley. Production of the final season begins around town this fall and returns to A&E in 2017.

Written by By Amar Mirchandani @amarmirch
Image via Rihanna / Facebook