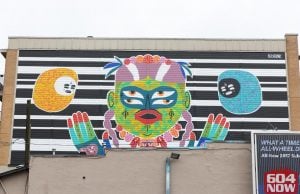 Murals beautify cities by transforming blank walls into canvases filled with electrifying pops of colour and intricate designs. In Vancouver, the many new murals developed along with those already in existence, bring the city to life, making it less gloomy on its greyest days.

Murals address various issues central to Vancouver’s greater social, cultural, political and historical conditions all while contributing to the growth of an ever-lasting public art scene. Here are a few must visit locations with an interesting sneak peak behind the work that went into them. Each mural featured says something about Vancouver and its rich local culture. 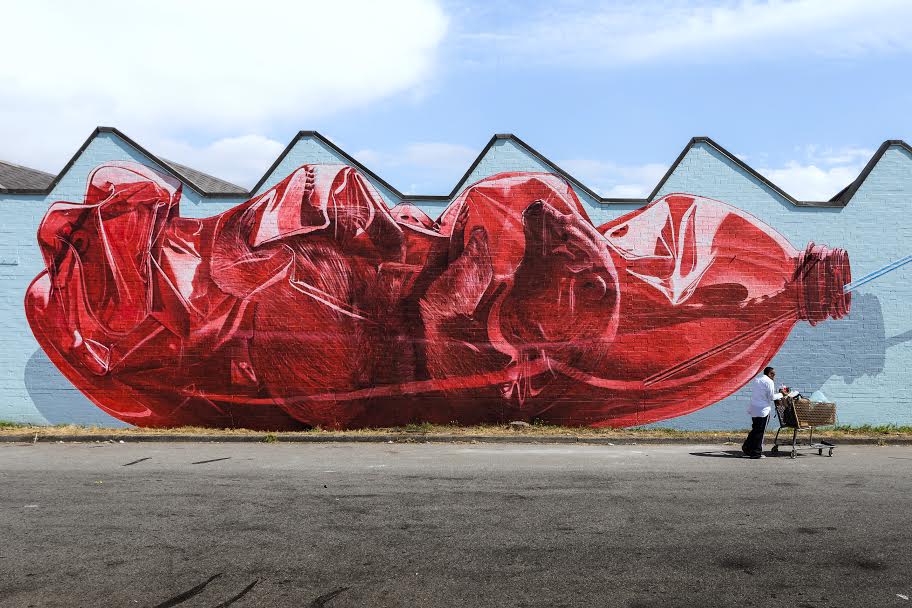 A wall with a unique shape on Industrial Avenue needed to be filled with a pop of colour and an intriguing message. What better way to do this than through art? A polar bear trapped in a plastic bottle was Nevercrew’s vision. It is interlaced with messages about the fragile balance between humankind and nature. To get their message across with immediacy, the artists approached this mural proactively and completed it in three days! Pay close attention to the lamp post beside the mural when visiting this location. It is painted to resemble a plastic drinking straw. 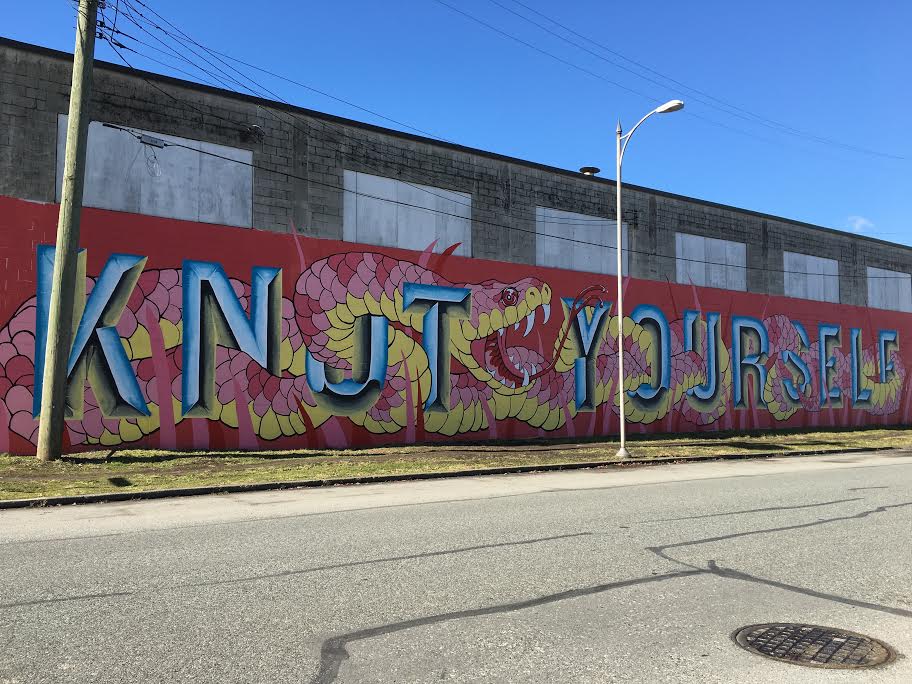 When travelling West on the Skytrain towards Waterfront, a large wall with the words “Knot Yourself” sprawled across it might capture your attention. Due to its sheer size and the power-lines located above it, navigating the space of this wall’s location posed a major challenge for artists. This, however, was a challenge Benjamin Knight and Katie So were more than willing to conquer. Within a one week period and with the help of a small volunteer crew, the mural was up and ready to be admired by Vancouverites and has turned out to be a commendable addition to the city. 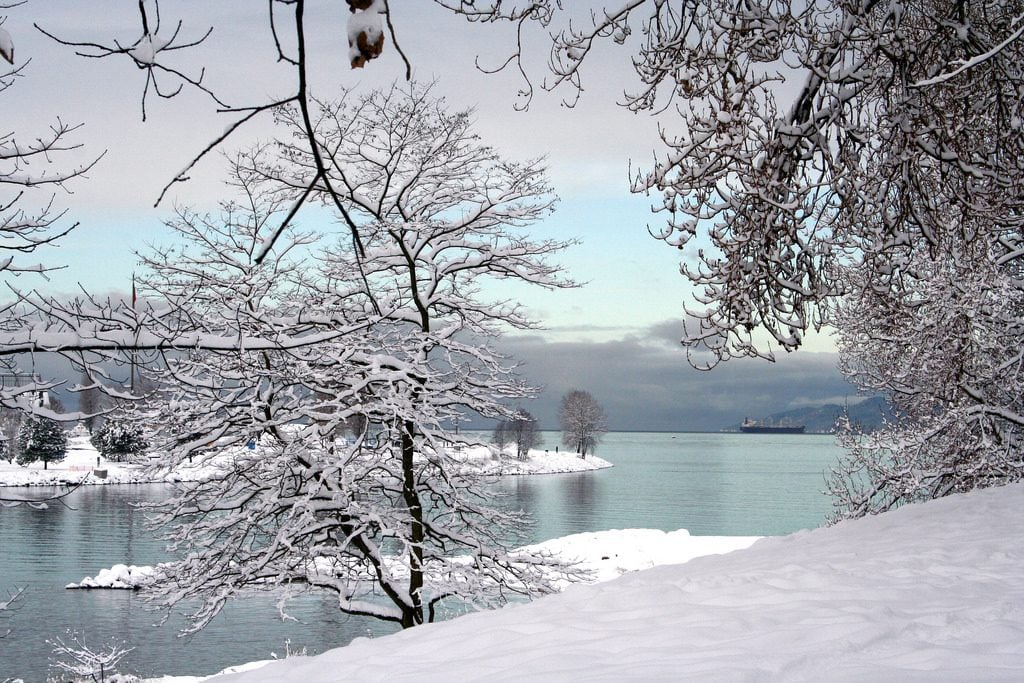 The Last Time Vancouver Had A White Christmas

A white Christmas is so rare in Vancouver that in the last twenty years, we’ve only experienced it on three occasions. However, the majority of...

Craving that sense of nostalgia only your childhood can bring? Well, look no further. These are some of the most memorable Metro Vancouver attractions that... 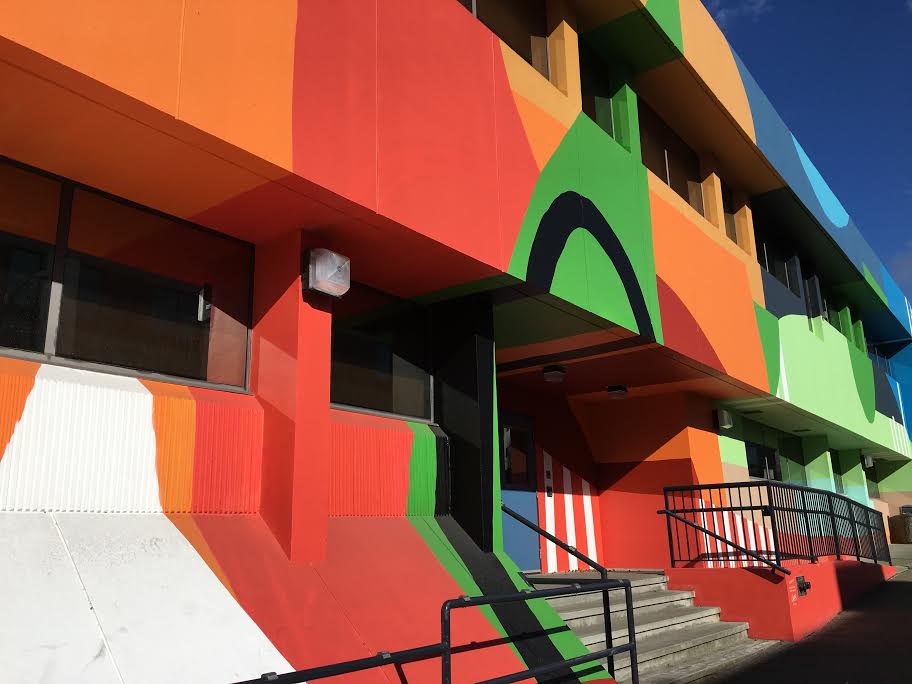 30,000 square feet of colourful shapes explode over the Hootesuite office on 5th East and 8th Avenue. Courtesy of Vancouver local, Scott Sueme who tackled his largest wall to date and created the second largest mural in Vancouver. Though unplanned, Scott Sueme managed to paint the rooftop portion of the Hootesuite building by covering its south facing facade in art. A daring move that paved the way for a much more cohesive and impactful piece in just two weeks! 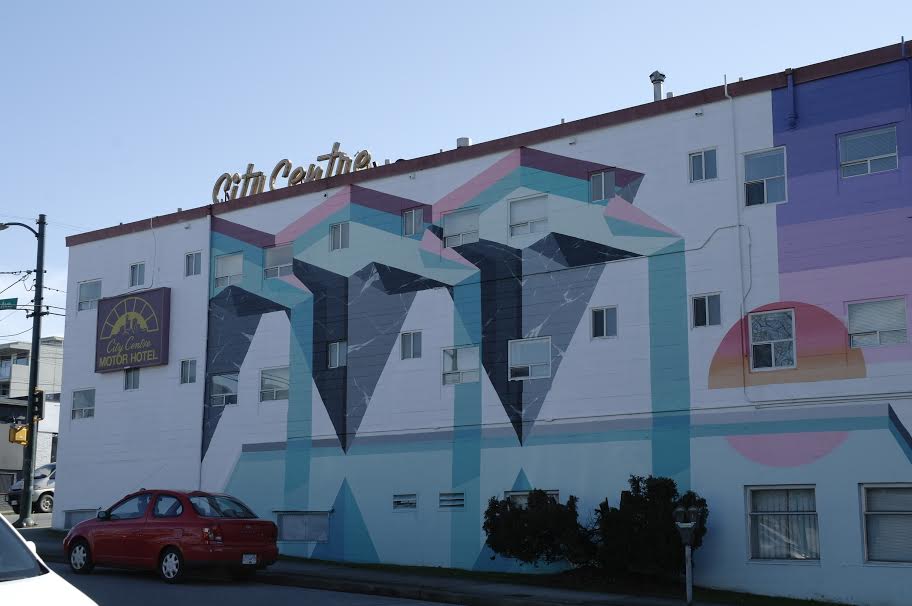 The City Centre Motor Hotel on Main Street had a makeover this summer by Christoph and Florin Schmidt, also known as Low Bros. Their angular artwork is influenced by illustration, design and the melding of shapes. Through art, they address current topics by blending the past, present and future. Together they preserve what once was while hinting towards what can be. When admiring Low Bros’ artwork one will find a surplus of colour, cubic forms, patterns and contrasts between light and dark that are both abstract and contemporary.

Inspired by bike rave phenomena, Oksana Gaidasheva and Emily Gray brought the shipping container in the alleyway behind F as in Frank to life with animal and biked themed visuals. Not only did they capture popular bike culture in Vancouver but added animals to their depiction as they freestyled the painting process. A racoon, a dog, a black bear and a Canadian goose, are all animals one can find within the city. Oksana and Emily’s vision captures the spirit of Vancouver locals in the fun and energetic way each animal is portrayed. Oh, and don’t forget to keep an eye out for ET! 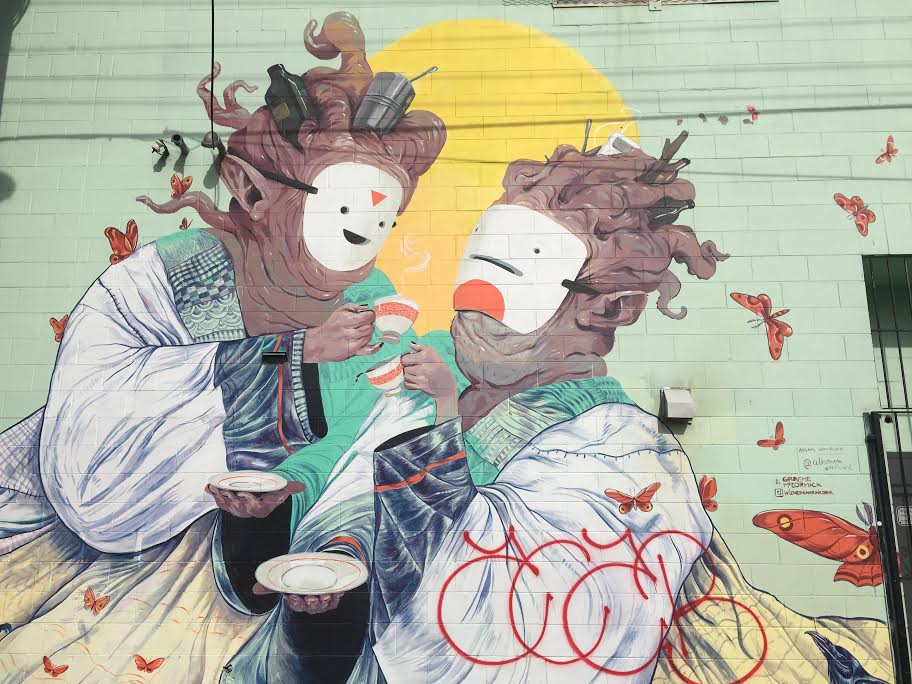 So I Ate An Entire Racoon

This piece is unofficially titled, “So I Ate An Entire Raccoon” as a result of a conversation both artists had during the painting process. A fitting topic for devoted Vancouverites! Even though Alison Woodward and Graeme McCormack both ripped their pants on the same day while creating this mural (oops!) it was still a blast to paint. When visiting this location, take a close look at the i-Pod nestled into the masked figure’s hair on the right. Fun fact, it’s jamming out to “Sorry” by Beyonce. 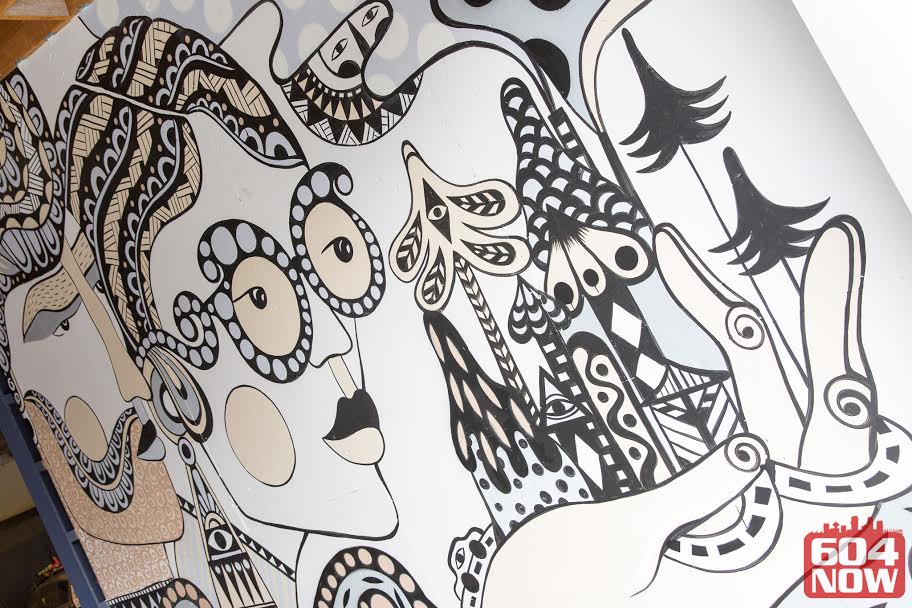 Granville Island’s newest mural painted by Ola Volo for the three day Winterruption festival is located in The Forge, a covered parking lot across the Public Market known for its rich industrial history. It contains winding images that connect people, nature, and urban forms while capturing the intrinsic meanings of Granville Island through feelings of community, warmth and a welcoming urban space. 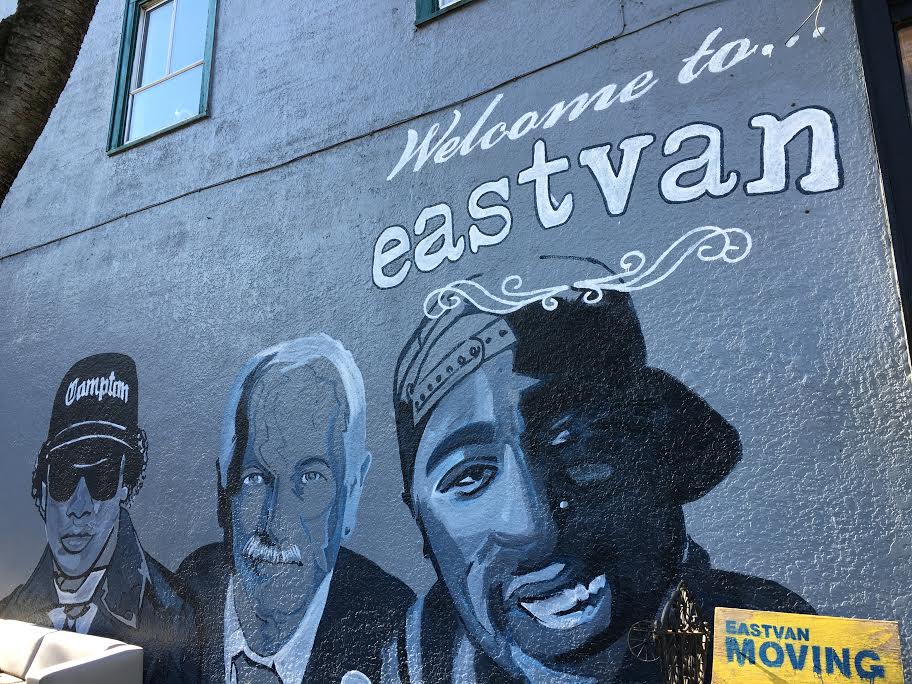 Calling all hip-hop heads to Nick Gregson’s piece located outside of Shop Wrong. A portrait featuring Eazy-E and Tupac along with the previous leader of the NDP, Jack Leighton. With this mural, Nick Gregson creates an image people in East Van can identify with. The incorporation of Jack Leighton (someone Nick wants to learn more about), is a nod to the progressive-political ideas that shape East Van. While town for a show, the Wu-Tang Clan visited Shop Wrong to look at this piece for themselves. Checking out this mural is a great way to get a feel for the culture of East Vancouver. Not to mention the fact that passerbys could potentially run into popular hip-hop artists on-site. 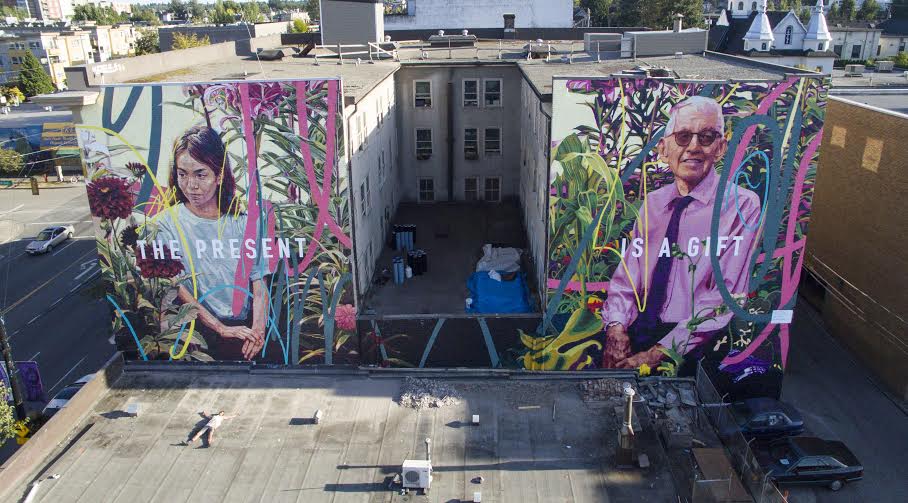 The Present Is A Gift

This mural is so fantastic no one would ever guess it was actually re-drafted five days before its set production date. Due to unforeseen circumstances, last minute adjustments were made to the original mock up of this piece. Luckily, everything worked out wonderfully for both Drew Young and Jay Senetchko who were able to portray two lifelong residents of the Mount Pleasant community. The woman in the mural, Paisley Nahanee is a Coast Salish woman raised in Mount Pleasant. The man is Bob Butler, who has worked in the area as an optometrist for over 60 years. As two longstanding residents, Paisley and Bob capture the true essence, history and culture of Mount Pleasant. 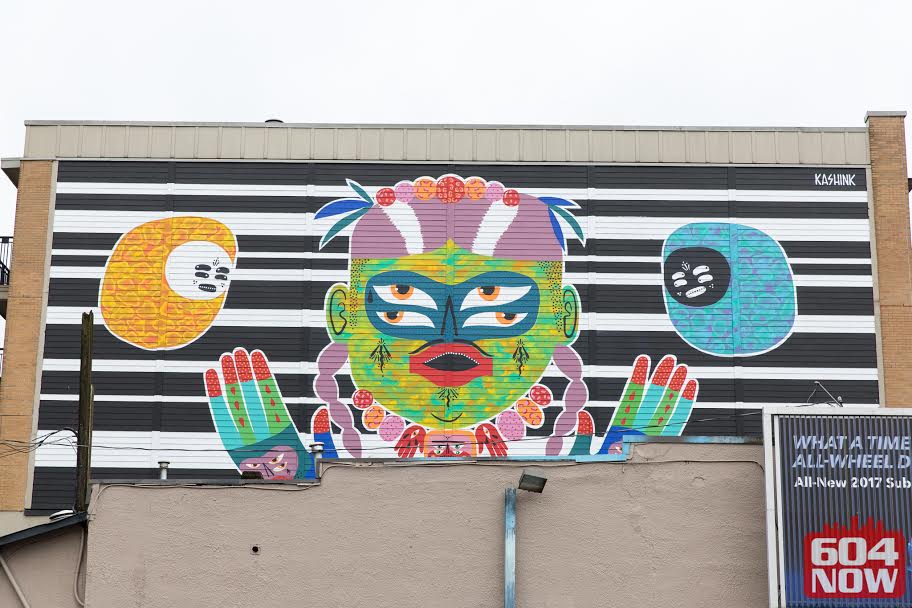 As the festival wrapped up one building still needed painting. A strata apartment building that required a special skill set in designing pieces for large-scale walls and experience using aerosol paint. French artist, KASHINK painted this mural in less than five days with the help of the talented Oksana Gaidasheva. The mural was inspired by KASHINK’s visit to the museum of Anthropology and Lawrence Paul Yuxweluptun’s exhibit titled “Unceded Territories.” KASHINK describes her work as a universal connection point for all humanity and is influenced heavily by mask art.

Public art is an effective way of addressing important issues in Vancouver such as community building, artistic censorship, and diversity. It is also a great way of bringing light to the rich Coast Salish history and culture within the city. Through murals, dialogue about these issues is re-opened in a healthy and beautiful way.

In the coming months keep an eye out for many new murals that will appear throughout the city. In the meantime, stay busy by checking out the amazing locations featured above in the incredible art gallery found within our city’s streets.

A special thank you to Drew Young, David Vertesi, Nick Gregson, Emily Gray, Oxana Gaidasheva and Alison Woodward for their contributions to this guide.