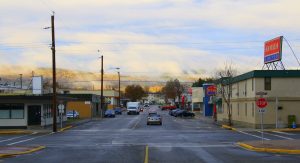 In a recent study naming the most dangerous places in Canada, a stifling eight places from B.C. made it to the top 25.

The annual report ranks communities according to the Crime Severity Index. It measures all police-reported crime, and breaks it down into categories. The report then takes volume and seriousness into consideration.

The top four places on the list are taken by communities in Manitoba and Saskatchewan. While Quesnel is the most dangerous place in B.C. at number five.

RELATED: What Does The New Statistics Canada Crime Data Tell Us About B.C.?

With a population of just over 10,000 people, the community has seen 127 assaults in 2018. Crime has gone up in all categories, except youth criminal justice act offences, firearm offences, impaired driving and cannabis trafficking or production, which have declined.

Other B.C. communities in the top 10 include Williams Lake and Terrace, followed by:

Of these eight communities, offences have risen overall with the exception of Fort St. John and Williams Lake, which have both declined.

Thompson in Manitoba ranks as the most dangerous place in Canada.

In other crime-related news, you might also be surprised to learn that the most common victims of cybercrime in Vancouver are not seniors, but millennials.