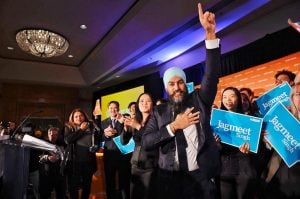 The NDP leader won the riding in Burnaby South and earned himself a seat in parliament.

Singh didn’t just have any old celebration, no, he danced to Soulja Boy and rapped to Post Malone.

Singh has gone 16 months without a seat in the House of Commons. Singh was up against Liberal Richard T. Lee and Conservative Jay Shin.

Thank you #BurnabySouth! I’m determined & ready to fight for the help people need – from the housing crisis to health care not covering everyone the way it should, Canadians deserve better. This isn’t the end of a campaign – it’s the beginning of one.

See you in Parliament. pic.twitter.com/x8Q1SyHcEU

See you in Parliament, Jagmeet.