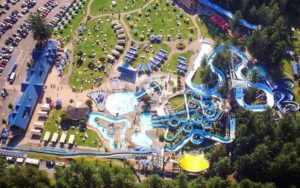 This summer is supposed to be astronomically hot, and while we love soaking up the sun, sometimes you just have to cool off.

Why not throw some fun into the act of cooling off by checking out the best waterparks around BC? We’ve compiled a list of all the best places to go, so you can knock them off your list one by one this summer.

RELATED: Langley Is Getting A Giant New Waterpark This Summer

Best Waterparks In BC

The biggest waterpark in BC, Cultus Lake waterpark has over 18 waterslides. What’s more, they also have five gigantic hot tubs, a lazy river, five food outlets, and more.

Located at 4150 Columbia Valley Highway in Chilliwack, they’re open rain or shine, 10AM to 6:30PM.

Looking for a change of pace? Instead of sliding around everywhere, Wibit waterparks offers people the chance to challenge their friends on a giant inflatable course in the middle of the water.

You can slide around, run, crawl, attempt the monkey bars, and so much more. They currently have three locations in British Columbia (Kelowna, Peachland, Penticton), and one in Ontario.

Located at 1600 Abbott Street in Kelowna, they’re open daily from 10AM to 8PM.

With seven waterslides, two hot tubs and a toddler pool with a fountain, Salmon Arm waterslides has an abundance of fun.

Furthermore, they have the lowest rates in the Southern Interior!

Located at 1155 Lakeshore Drive in Salmon Arm, they open for the summer season June 30th. They will be open daily from 11AM to 6PM.

Sunnday fun day ~ we spent the afternoon at Bridal Falls waterpark on the way back to Vancouver, haven't been to waterslides in years! 😁🌊⛱ #sundayfunday #bridalfalls #familytime #bridalfallswaterpark #waterslides #waterpark #bridalfallsprovincialpark #sundayvibes #famtime

It is also the only waterpark that has no stairs because it’s on a natural sloping hill, making it easy on the knees.

Get a bird’s eye view of our advanced body slides!

It holds 13 different water slides, including a variety of body and tube slides, and kid-friendly zones. Big Splash Water Slide Park is also opening a new attraction this year called the Boomerang, which is going to be Western Canada’s largest waterslide.

The park also got upgraded to include an adult-only hot tub, a Vegas style cabana, and a VIP private viewing deck.

A 30 minute drive from Vancouver, they’re located at 4775 Nulelum Way, and are open daily June 23rd onwards from 10:30AM to 7PM. If you’re hoping to go before then, they’re open weekends only in June.

What a great day with my wife, kids, my brother-in-law, his kids and of course our guest of honor "Aunty Gwen". Had so much fun at Atlantis waterslides.

Located 5KM north of Vernon, Atlantis Waterslides is a family-friendly park that holds multiple slides. What’s more, it also has a hot tub that has an incredible view of Lake Okanagan.

Additionally, the park also has VIP cabanas, an ice cream parlour, and heated water on all the slides.