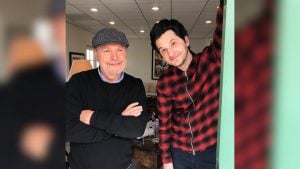 Ben Schwartz, known for his roles on Parks and Recreation and House of Lies, took to Twitter to crowd source Vancouver restaurant recommendations, things to do and places to see.

The actor, who is also a comedian, writer, director, producer and voice actor is 37-years-old and hails from The Bronx, New York.

He can next be heard in the Vancouver-filmed movie Sonic the Hedgehog which is based on the video game franchise. Schwartz voices Sonic, the supersonic blue hedgehog hero. The movie also stars Jim Carrey, James Marsden, Tika Sumpter, Adam Pally and Neal McDonough. The movie filmed in Vancouver, Ladysmith and Vancouver Island last summer and had its release pushed back until 2020 for some redesigns of the visual effects.

The star is back in town this summer and while staying at Sutton Place Hotel in Vancouver he’s looking for some places to eat. He’s in town filming the Disney+ live-adaption movie Flora and Ulysses and plays the parent of Flora along with Alyson Hannigan. The How I Met Mother Star, Alyson Hannigan, was in town last summer filming the live-adaption movie Kim Possible.

My beyond wonderful and talented 10 year old @disney daughter has been in more Tony award winning plays than I have. https://t.co/xmAJU8nJ0U

Naturally Vancouver’s Ryan Reynolds came to the rescue with some top notch suggestions:

And Bel Cafe in the Hotel Georgia. Oof.

Other famous Vancouverites pitched their recommendations too including Fin Wolfhard from Stranger Things and Crystal Lowe from the Signed, Sealed, Delivered film series:

Eat at Flying Pig in Yale town, go for sushi anywhere in the city and go to Kirin in Richmond or on Cambie street for Dim sum

Ben, let’s hang and eat. How long are you in town?

You Absolutely MUST go to KOBE… bring buckets so you can bring home their signature sauces…. no joke.

Tojo is to die for 🙏

Ben you gotta. Do it. This is the most talented group ever. CC: @tatianamaslany

The salmon-oshi sushi from Minami. Brunch at Medina. The best croissants in the entire world at Small Victory.

Any place where @ChefHawksworth is cooking

Tourism Vancouver and Vancouver Aquarium also reached out to Schwartz to make his stay that much more hospitable:

Hi Ben – we’d love to sort you out with an experiential pass. DM me and we’ll get it out to you!

You otter come hang with us! pic.twitter.com/kR8j7bpI2R

Filmed in front of a live studio audience. pic.twitter.com/LLcD2ajefb

Lots of great suggestions in Chinatown: @kissatanto @baobei1 + more. With the experiential pass from @MyVancouver, you can also come visit us at the Classical Chinese Garden! We'll even let you hit the gong — just DM us 😉 pic.twitter.com/IVmkfxuggU