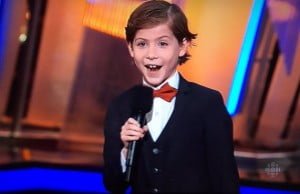 It’s fair to say that winning a ‘Best Actor’ award is a dream for most actors, and one Vancouverite has reached that dream relatively quick at just the age of nine.

Jacob Tremblay, who was born in Vancouver and raised in Langley began acting at the age of five and made his Hollywood debut in the movie The Smurfs. Since then, he has quickly taken the cinema world by storm, winning multiple awards along the way.

Tremblay won his biggest award thus far at the Canadian Screen Awards in Toronto on Sunday night, earning Best Actor for his performance in a leading role for the movie Room.

He beat out 86 year old Christopher Plummer for the honour, but he showed all class for the icon in his award speech.

It was a successful night overall  for Room stars, including Brie Larson, who won Best Actress, adding to the Best Actress award she won at the Oscars just weeks prior.