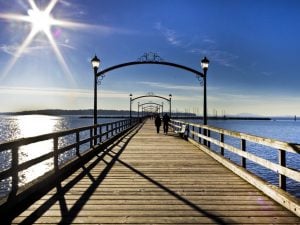 Rejoice outdoor enthusiasts! The White Rock Pier, one of the city’s most iconic landmarks, is re-opening to the public this morning, August 27th, at 11:00 a.m.

The Pier was originally scheduled to reopen on Saturday, August 31st, but crews finished all necessary work ahead of time.

On Monday, the City of White Rock made the announcement in a Facebook post, which as of Tuesday morning has been shared more than 800 times.

“Thanks for all of our donors and fundraisers” reads the post.

“You’ll be recognized at the official reopening of the White Rock Pier on Saturday, Sept. 21”.

Back in December 2018, a 30-metre-long section of the beloved pier was destroyed as the result of a powerful storm. The forceful winds and resulting strong waves battered nearby boats against the pier until it split into two.

One person was even trapped on the pier and officials had to call in a helicopter to rescue the individual.

Built originally in 1977, the Pier’s weak state was evident after the December 2018 storm. As a result, numerous upgrades have been made to improve fortification.

Some upgrades include “additional rebar, the addition of a concrete additive to increase longevity of concrete, additional timber repairs, pressure washing the Pier, and temporary infrastructure to protect the conduits under the north end of the Pier.”

With clear skies in the forecast for the entire week, you should expect the Pier to see large crowds daily.

For more news pertaining to your community, check out our Cities section!