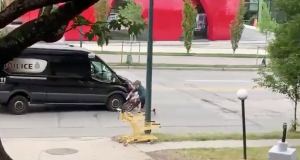 A video uploaded to Twitter shows a Vancouver Police van hitting a cyclist along Great Northern Way near the Emily Carr School of Design.

The video was posted on Monday afternoon and has created quite the controversy online among people.

As the video begins, which is just 3 seconds long, it shows a male riding a BMX bike without a helmet suddenly going onto the road. The cyclist drops his bike to avoid a car in the far left lane, but ends up being hit by a Vancouver Police van in the nearest lane.

The cyclist gets tossed forward and lands on his back in the middle of the road.

As you might expect, this incident has created quite the debate about cyclists and how they ride on local streets.

Cyclists are NOT very fine people. Hopefully this loser was ticketed for reckless driving and no helmet.

Yet another careless cyclist ina city full of them. Vancouver needs to do as montreal is doing, and making cyclists responsible by fining them and forcing them to follow the same rules of the road that everyone else does. #VPD @VancouverPD should be pushing this.

Cyclist Should have been arrested and charged #vanpoli

Wtf was he doing anyways? If he didn’t bail he would have rode full speed into traffic. Nice hip check by the cops though

According to Vancouver lawyer Kyla Lee, the “cyclist here is committing a number of offences”.

The cyclist here is committing a number of offences, and riding in a way that compromises public safety. I wonder if @VancouverPD charged him with any of those offences. If it had been a driver, they would have. https://t.co/mOa5lTclax

It’s not known at this moment if the cyclist has been charged by police or not.