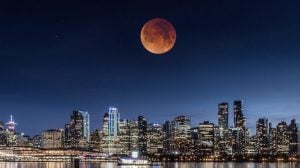 Set your calendar for the night of January 20th to the 21st. According to the Weather Network, the “Full Moon will pass through the northern half of the Earth’s shadow, producing a Total Lunar Eclipse.”

And it will be even more magical than previous ones, because it will be visible from all across Canada. Not only that, but it will also be larger and brighter than normal.

RELATED: 7 Of The Coolest Camper Vans You Can Rent In BC

But of course, in order to get the best vantage point for this, you should go as far away from the city lights as you can get. Parks, remote and rural areas are typically better for catching a glimpse of this natural wonder.

There won’t be another Total Lunar Eclipse for all of Canada to see until May of 2022. In BC, the eclipse will start around 6:36pm and end around 11:48pm.

It’s a great spot for camping and stargazing nestled along the Sea to Sky highway in between Vancouver and Squamish. Being in a vast open space will definitely help your chances of seeing the eclipse.

Loving the camera on the iPhone XR. This is straight out of the phone (okay I straightened the horizon). Obviously I had a little help from the amazing light during this sunset. It almost looks like a horizontal gradient wash. That may be a term I made up. #lookmanofilter #sunset #salishsea #robertscreek #sunshinecoastbc

It’s a sleepy little island away from the hustle and bustle of the city. You have a much greater chance of getting a good look at stars or the eclipse when you’re here.

Being at a higher elevation away from the downtown core will also help increase your chances of getting a better view, plus it’s just an awesome place to spend an evening enjoying Winter sports.

Enjoying the morning glow and a cup of coffee with the cabin blanket and socks ☀️ PC: @thrujoelslens #tentreeambassador

Get away from the city to this lush park in the Fraser Valley and relax with a blanket and a thermos of hot chocolate while gazing up at the sky for this special night.

“Only when we are brave enough to explore the darkness will we discover the infinite power of our light”. – Brene Brown Exploring Eagle Island last night with my teenage boy. #brenebrownquotes #whytecliffpark #eagleisland #longexposure #vancityhype

Head to West Vancouver to this serene and secluded park to grab a good spot to watch the stunning eclipse unfold.