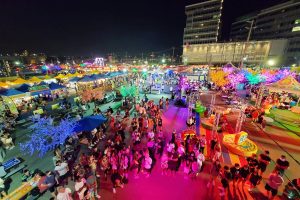 The Richmond Night Market was one of the most anticipated events of the summer, and it has been drawing large crowds since it opened.

After being closed for over 16 months and facing numerous delays, it finally opened on July 23. It was met with a positive response as the public seemed to have missed the annual attraction.

However, the 2021 event was scheduled for its shortest season yet and was originally wrapping up on Labour Day weekend. Fortunately, due to popular demand, the event was extended for 2 more weeks.

RELATED: Chinatown To Light Up With a 2 Day Lantern and Dimsum Festival

Running every Friday, Saturday, and Sunday evening, the Richmond Night Market has been extended their last day to September 19. Their Saturday hours has also been extended to start an hour early.

The season so far has been deemed an overall success by event organizers, drawing huge weekend crowds. Although the vendor stalls were decreased, people were still happy to go for the popular food items.

Due to large crowds though, they had to implement increased safety measures and limit the number of people going entering the grounds.

As part of the extension, organizers have also announced a special Lantern Festival on their last weekend, coinciding with the Chinese Moon Cake Festival taking place on the 21st.

The final weekend will be lit up with outdoor lantern installations along with live performances featuring traditional Asian dance by local performers.