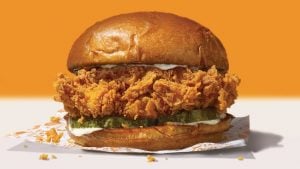 Popeyes’ Chicken Sandwich has taken over the United States.

The New Yorker, a historic magazine known to be high-brow and hoighty-toighty described it like this:

“Together, the elements of the Popeyes chicken sandwich are so perfectly balanced that they meld into one another to form a new, entirely coherent whole.”

The headline: “The Popeyes Chicken Sandwich Is Here To Save America”

Like most fried chicken, the Popeyes Chicken Sandwich comes in both the classic and spicy flavour.

It features a monster slab of fried chicken breast, topped off with crisp pickles and cucumbers, all between two “buttery” and light buns.

It’s received almost universal acclaim, which, as you may know, is hard to accomplish on the internet.

Y’all tiring these workers out with this Popeyes Chicken Sandwich pic.twitter.com/H4KtMKCkNu

Shout out to all the teachers who started the school year this week. Thank you for everything you do. All of you deserve a Popeyes chicken sandwich (and higher pay).

Me after “testing” the Popeyes Chicken Sandwich for the 10th time (via @JPFinlayNBCS) pic.twitter.com/kSsDD823Kn

Sounds like someone just ate one of our biscuits. Cause y’all looking thirsty. https://t.co/89eqI5vk2z

The “origin story” of this sandwich, however, is equally good. It all started with a Yelp Reviewer at a California restaurant named Sweet Dixie Kitchen.

The reviewer spotted an employee with a few orders of fried chicken from Popeyes. He initially thought it was just a snack for the employees, but soon realized that, no, Sweet Dixie Kitchen was re-selling Popeyes fried chicken as part of a $13 entrée. #PopeyesGate was born.

To their credit, Sweet Dixie Kitchen not only owned it, but doubled-down, saying “We PROUDLY SERVE Popeyes spicy tenders.” Their explanation was that they source the best ingredients, and that in the case of fried chicken, that means getting Popeyes.

Evidently, the gesture paid off, as Sweet Dixie Kitchen became the only place you could get Popeyes’ new Chicken Sandwich for a few days this month, before it was introduced into all Popeyes locations.

That is, all Popeyes locations in the United States. As you might have heard, Popeyes opened up their first location in British Columbia late last year, and more have been announced.

What has not been announced, however, is whether or not this now-legendary chicken sandwich will be coming to Canada. For now, we’ll probably just have to make due with KFC, Church’s, Nandos, Jukes, and Tim Hortons.