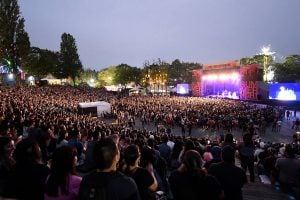 It’s back! The annual PNE summer night concert lineup has been announced and it’ll once again rock the stage beginning this August. This year’s lineup showcases a wide range of diverse entertainment and internationally acclaimed musical performances.

“There are so many great acts this year, including plenty of classics,” says Shelley Frost, CEO of the PNE.

Attendees will get to enjoy performances each night at 8:30 p.m. that’ll include pop, rock, country, and R&B.

“Here in Vancouver, we are so fortunate to have so much to do. The more great events we have the better and the fair wants to be a part of the landscape” continues Frost.

Update: ZZ Top was originally scheduled to perform on August 18th. That performance was cancelled, with Cheap Trick stepping in.

The PNE summer night concerts will run every night the fair is open. They start Saturday, August 17th and go until Monday, September 2nd, 2019.

All concerts are FREE with a purchase of admission to the fair.

If you’re eager to get a really good seat, you can also purchase reserved seats. They start at $25 and go on sale Friday, May 24th on Ticketleader.ca.

In addition, you can also reserve a private suite for Summer Night Concerts. To do so, click here.