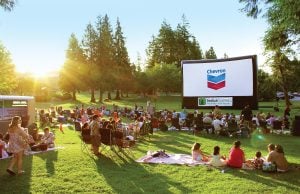 The warm air hitting your skin while wrapped up in a blanket under the stars is an unbeatable feeling. This summer, experience the feeling in one of the many outdoor movie options in Vancouver.

Curious as to what you can expect to watch throughout Metro Vancouver?  We’ve compiled a list of each location, along with what movies each location will be screening.

RELATED: These 2 Iconic Sylvester Stallone Movies Were Filmed in BC

The Fresh Air outdoor movie series will be returning to Stanley Park this summer from July 3rd up until August 21st.

While it is free, there’s an option to purchase $20 VIP tickets, which provide front row seats to the screening.

Outdoor Movies Under The Stars returns to Holland Park in Surrey this summer.

The free films will be screened every Saturday in August. Entertainment starts at 5PM, and movies will be played at dusk.

Waterfront Cinema is returning to Canada Place this summer, so you can indulge in your favourite films by the water.

The outdoor movies will be screened every Thursday from July 12 to August 23rd at dusk, between 8PM and 9PM.

Family Movie Nights in North Vancouver are back with movies in the plaza. The outdoor movies are shown on a gigantic screen, and the Library Advisory Council runs a concession with snacks and drinks.

Before the movies begin, there’s an abundance of family-friendly activities, including face painting, piano sing-alongs, and entertainment. Movies begin at sunset.

Gates open at 6:30PM and films begin at sundown. All you need to do is bring some snacks!